This is a post I need to write but you might not need to read – I’m going to discuss some of the complicated, distressing parts of having Tourettes, and if reading it feels too much at any point please stop or take a break. It’s not likely to give any answers, but hopefully it’ll give voice and visibility to some of the struggles that might otherwise go unacknowledged.

I’m writing this not from a calm distance but in the midst of intense distress. Writing has helped me process difficult experiences in the past, so I hope that I’ll feel a bit better when I reach the end of this. Bear with me though — deep breaths.

The first thing to say is that nothing bad has happened. In fact, what’s upsetting me is not at all unusual – it’s been an issue my whole life. It’s as old as I am and yet the upset and distress it can cause never lessens, but feels fresh and powerful each time it happens.

Rather than a particular incident, what’s upset me today is a set of behaviours relating to Tourettes and their impact on people I love and care about. This is a complex issue so I’m going to try to unpick it one step at a time.

First, there’s an element of Tourettes that involves doing the worst thing possible in any given situation. This oppositional impulse differs in its intensity from person to person, but in me it’s strong. During my comedy routine I give examples that people find funny: shouting ‘Bomb’ at an airport or letting a whole audience know that my sister was pregnant before she’d even told my mum!

I describe these types of tic as ‘oppositional’ because they’re about doing the exact opposite of what I would want or choose to say or do. This process happens incredibly fast, isn’t consciously thought about on any level, and is as automatic as blinking.

It affects both motor and vocal tics and is there all the time. It can, though, intensify at particular times like when I’m tired. But unfortunately this type of tic isn’t always funny or as harmless as not being very good at ‘I spy’.

In fact these tics can be dangerous – my impulsive and oppositional motor tics have included grabbing knives, touching hot objects or wheeling myself towards open stairways or roads.

I’m becoming increasingly aware of how deep this oppositionality runs. Since childhood I’ve found that when I lie down to try and sleep my motor tics will intensify, making getting enough rest hard, and that the more tired I am, the more intense this reaction is. And it’s only recently that I’ve thought about how this links to oppositionality.

I don’t come out with these oppositional tics by choice – it’s not as though I’m consciously thinking about what the right or wrong thing to do would be. But it seems as if a part of my brain is always switched on to this. It’s not the same as having no awareness of danger or not having the capacity to make decisions. I have a very good sense of danger and what’s right and wrong – I just have a very poor ability to control my impulse to do the opposite of what I would rationally choose to do.

While this can be exhausting, I’ve always been this way, so many aspects of it are very familiar and can be managed with pragmatic interventions like, for example, using plastic cutlery, having baby gates on open stairs, and support workers who understand my tics and have excellent dynamic risk assessment skills.

It isn’t motor tics that I find the most difficult aspect of this oppositionality – these mainly relate to my physical safety and can be managed with the right support.

With strangers these tics often relate to physical characteristics, for example: “Fuck off fat nose”. Or they can mimic voices or accents. It’s this type of tic that caused Ruth, when she and I arrived in Liverpool many years ago, to shout “Liverpool is Shit” the moment we got off the train.

I’ve heard lots of people who don’t have lived experience of Tourettes characterise this as ‘saying what’s on your mind’ but that’s a simplistic, unhelpful misconception.

When I visited the American Embassy recently to get a visa I ticced “Shoot me in the foot” as soon as I saw the armed police. I wasn’t thinking about them consciously, but their presence triggered an automatic and lightning-fast response from my brain. Fortunately, their own response was more nuanced and they didn’t follow my instruction!

People assume that managing strangers’ responses to tics is the most difficult aspect of this, but weirdly for me it’s not. There are issues of safety linked to this and some people will be more at risk than others, but mostly I can explain what’s going on, and ultimately I don’t really care about what strangers think.

It’s much more emotionally tough with people I know well and do care about, and ultimately this is the root of my current distress.

The better I know someone the more personal and targeted some of my tics can be. This often happens at critical times like at the end of an argument just after everything’s been resolved or – as happened the other day– when I’d been having an extremely long and exhausting ‘ticcing fit’ and been in need of the support of the person my tics had been targeting.

Leftwing Idiot had come round for lunch. We’d had a lovely meal and I was just getting ready to go for my afternoon nap. For the last few years my episodes of intense tics, which I call ‘ticcing fits’  – they’re also known as ‘tic attacks’ – have been more stable. Up until recently I’ve been averaging 6 episodes a week and generally they last about fifteen minutes. But last week was tough, with 15 episodes, the longest of which was three hours, and it’s that one that’s at the heart of this post. 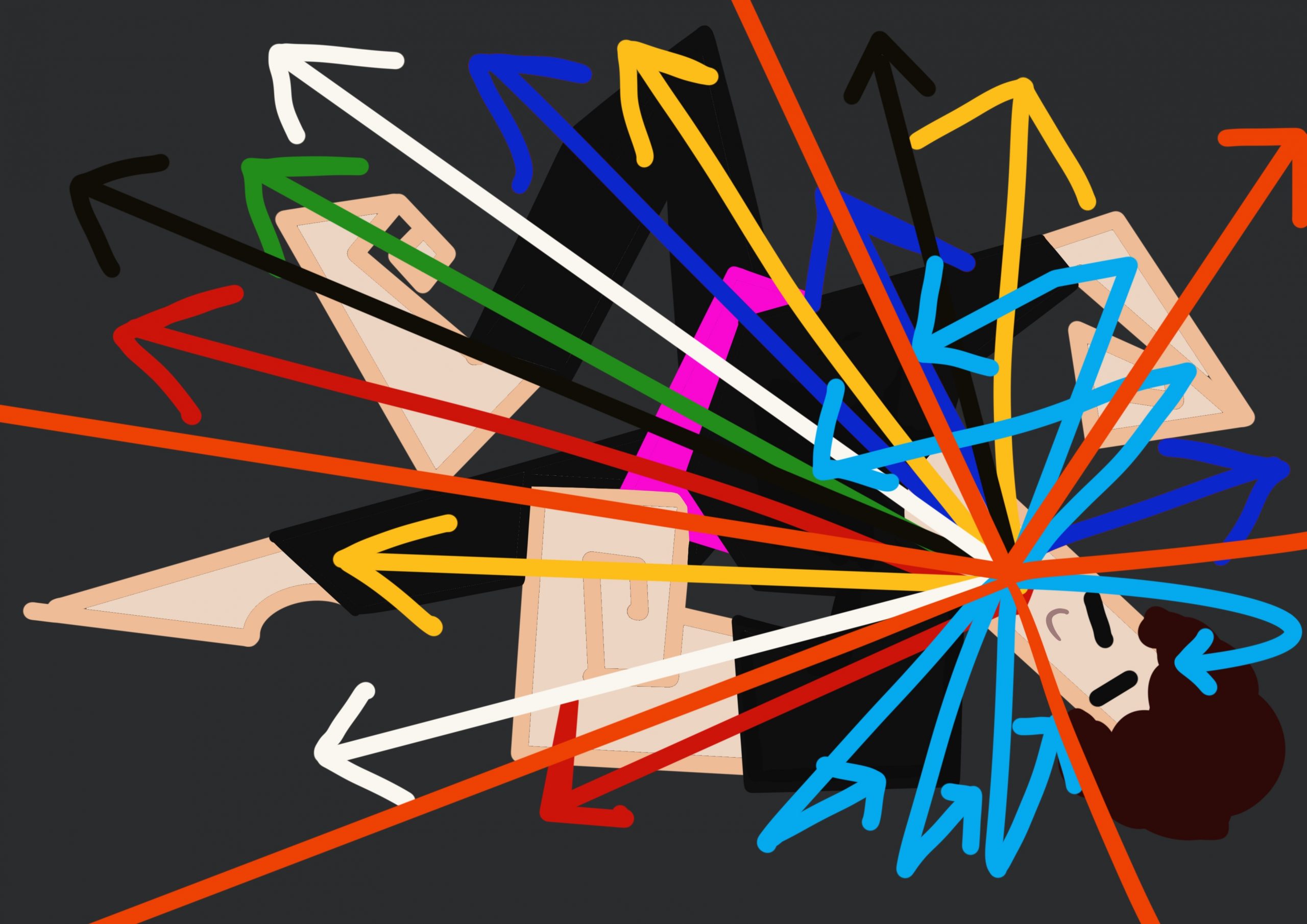 Claire and Leftwing Idiot supported me sensitively and with incredible skill and kindness. The episode went on and on, during which time my tics were particularly unpleasant and aimed at Leftwing Idiot. I know him extremely well and therefore my tics know the worst things to say to him.

I can’t begin to describe how distressing it is to hear and feel this ugliness coming out of my mouth and to see how the more distress it causes me or him, the more it seems to intensify.

I’m not bothered by rude vocal tics or even ones that give away my personal information but vocal tics that risk causing pain and damage to others are really hard to manage practically, emotionally and intellectually. Eventually the fit subsided, I got my nap, and Leftwing Idiot and Claire had a break.

It was only earlier today that I realised that this destructive incident was continuing to have a big impact on Leftwing Idiot’s wellbeing. We talked it through and it was incredibly hard to hear how worn out by incidents like this he has been.

He has an incredibly thorough knowledge of Tourettes and has been breathtakingly supportive of me over the years. He recognises and understands that these are tics, and yet that doesn’t stop them causing him pain. And that is a very hard reality.

I came off the phone and sobbed – I feel so desperately sad that my body and brain can cause hurt to others, and seemingly no amount of effort of will on my part can prevent it. By coincidence I noticed an incredible thread on Twitter by @twitchyspoonie on Coprolalia and on tics that include racial slurs. In this thread she says:

‘So, there is no disability that causes racism and that’s obviously true.  However, Tourette’s can make you say racist things that you don’t believe and have no relation to your thoughts or character…. That doesn’t mean, Tourette’s causes racism. Obviously that’s societal. Also, not everyone with Tourette’s will have racist tics. The only people who might will be those with a symptom called Coprolalia…Coprolalia makes us say things that are inappropriate or things that we don’t want to say.… Now, obviously, things that are inappropriate vary from culture to culture and in various situations, so by definition, so does Coprolalia. So obviously, while racism does not come from Tourette’s, the only way for someone with Coprolalia to guarantee never to have a racist tic is to literally be entirely unaware that racism even exists. Which is obviously impossible. Racism is everywhere and we all know things that might offend various groups of people. Just not all our brains compel us to say those things.”

So, there is no disability that causes racism and that's obviously true.

However, Tourette's can make you say racist things that you don't believe and have no relation to your thoughts or character. So can other disabilities that cause coprolalia, but I know less about those.

This thread and the many incredibly thoughtful responses to it came just at the right time for me. Just as how what is ‘inappropriate varies from culture to culture ‘, what is inappropriate and upsetting varies from person to person – the only way I could be sure to avoid hurtful tics would be to avoid getting to know people in the first place.

This is an incredibly difficult area to navigate, particularly at the same time as being worn out by the physicality of a very intense, long, painful ticcing fit.

I started this post by promising no answers, but there are a few things that I’m going to do in the coming hours, days and weeks to help manage how I’m feeling now and situations like this in the future. These are:

But I’m going to start by having a cuddle with Joyce who’s just arrived and by eating the delicious dinner of stewed peas that she’s made for me.

3 responses to Oppositional Me