My social media timelines are currently full of posts about the Edinburgh Fringe. It hadn’t been on my radar until recently, because for a Clinically Extremely Vulnerable (CEV) artist like me, the risks of COVID are still significant, so watching or making theatre hasn’t yet felt safe.

But news drifting in from the Fringe has unearthed some surprising feelings and left me in a reflective mood.

I first went to the Fringe in 2014 with our first show Backstage In Biscuit Land. I was blown away by the experience, both by the shows I saw and the atmosphere in the city. Also, I enjoyed performing way more than I’d expected to! I’ve been back several times since, both as a performer and as a programmer.

But however much I’ve enjoyed my Fringe experiences, there have been frustrations too, particularly around the accessibility of venues and shows. In 2016 I wrote a piece for The Stage about access in Edinburgh. I thought I’d revisit some aspects of it to see if any progress has been made. 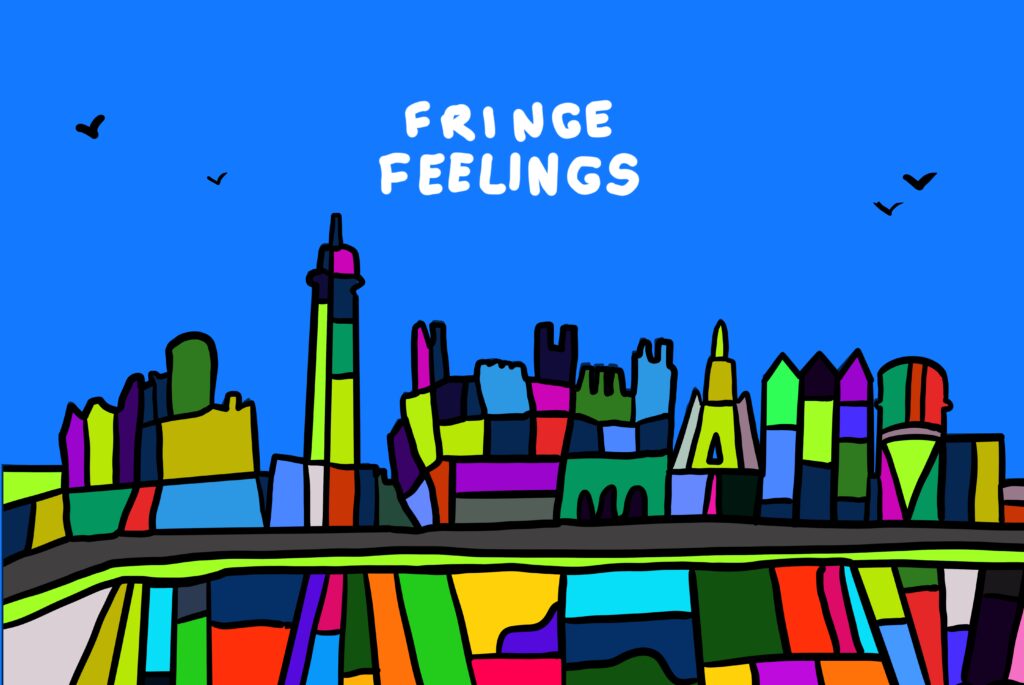 Back in 2016, 53% of shows were wheelchair accessible – in 2022 this has risen to 63% (2180 shows). It’s great that this number is rising, but there are still 1296 shows that I wouldn’t have been able to see simply because I move around on wheels rather than my feet. It’s obviously encouraging to know that physical access is improving, but the pace of change is frustratingly slow. If it continues at the same rate, the Fringe won’t be fully accessible to wheelchair users for another 26 years!

One thing that does feel significantly easier than at my first Fringe is finding out which shows have thought about access. Rather than stacks of brochures with different access symbols requiring complex cross-referencing, the Fringe website is now a breeze, with search features that make identifying accessible work much more straightforward.

But, as a wheelchair user, I still can’t book tickets online – I would still have to call or email a specific team to get tickets. Back in 2016 this is what I wrote:

“It’s not good enough for disabled people to simply ‘be able’ to book – we deserve equality of experience; this is how inclusive audiences will be built and maintained.”

I stand by this point, and it’s a shame no progress has been made when it comes to the booking experience for wheelchair users.

The other persistent issue is the absence of access information for some venues. Around 30% of those listed on the website (81 of 277 venues) had no accessibility information this year. To be included in the list, shows must have an address and venue number, so it seems reasonable to me to require access information to be provided as a condition of being listed.

While the number of wheelchair-accessible shows has risen, the same is not true for many other access provisions. The number of relaxed performances, for example, has dropped from 3% (107 shows) of all shows in 2016 to 2% this year (70 shows). And while Audio Described shows have technically risen from 0.3% of shows in 2016 to 0.5% (18 shows) in 2022, this is still a desperately small percentage of work being presented at the Fringe.

The percentage of captioned shows has quadrupled since 2016, going from 0.6% to a whopping 2.2%, but this is still just 77 shows in a Festival with thousands more. I’m also aware that a significant element of this increase is down to one captioner taking a leap of faith and making a point of being in Edinburgh during the festival.

Back in 2016 I wrote about the challenge for people with more than one requirement. For me, a wheelchair-using adult who also requires relaxed performances, there are only 22 shows that I’d be able to access at the 2022 Fringe. And for children who need their art audio described there is only 1 accessible show. This is largely identical to the issues I wrote about in 2016.

But there’s an even bigger access elephant at the Fringe and it’s something I’ve seen little mention of online – COVID-19. As someone clinically extremely vulnerable to COVID, seeing shows in person is not yet an option for me. And while 2.5% (87 shows) are available to watch online, there are no socially-distanced performances or masked performances listed, and there’s also no option to search for outdoor work only, making it hard to manage COVID related risks.

It’s hard not to feel left behind as a CEV artist, just as it’s hard to see so little progress being made when it comes to access more generally at the Fringe. Seven years on from my piece in The Stage little has changed, despite the efforts of some venues, companies and individuals.

“I want to see a fringe where disabled people are in audiences, on stages, and working behind the scenes. As the agenda-setting trade fair of our sector, Edinburgh matters because it has the potential to create deep-rooted change across the UK and beyond… It’s time to move accessibility up the to-do list so we can take action together.”

But in 2022 this vision of the Fringe feels even further away. And besides access issues, the huge costs and risks involved in taking work to Edinburgh have only intensified, meaning it will be out of reach to many artists.

It’s hard to know how to end this post without it feeling bleak. I’ve found it more difficult than I expected to think about, partly because so many of the barriers I encountered are unchanged, but more because it’s made me remember how exciting it was to take work there, to feel the buzz in the city and to hang out with other artists. It’s hard for me to imagine the Fringe being safe and possible again for me anytime soon.

I don’t have all the answers, but I’ll certainly keep asking questions of the Fringe and the wider sector. One thing I do know is that the art, ideas, and ingenuity of disabled people are too important not to fight for.

I’m sure I won’t be the only disabled or CEV artist having to navigate these complex practical and emotional realities, and if you’re one of them please know that you’re not alone.

One response to Fringe Feelings