In February last year, we celebrated Touretteshero’s 10th birthday with a big party in Battersea Arts Centre’s Grand Hall. The place was packed with the love and laughter of those who’ve helped us transform Touretteshero from an idea into an organisation with a mission to change the world.

While Ruth and I hosted on stage, a small, trusted team kept everything else running smoothly. As I looked out, I could see my friend and colleague David at the back of the hall, carefully, calmly and kindly welcoming guests into the space. This party seems such a long time ago, and the pandemic’s made gatherings like it unthinkable now. It’s also led to unfathomable losses.

This post is written with huge sadness as we grapple with the loss, to COVID, of David, a friend and colleague whose immense skill, solid support and unwavering encouragement have shaped many lives, careers, and Touretteshero events. 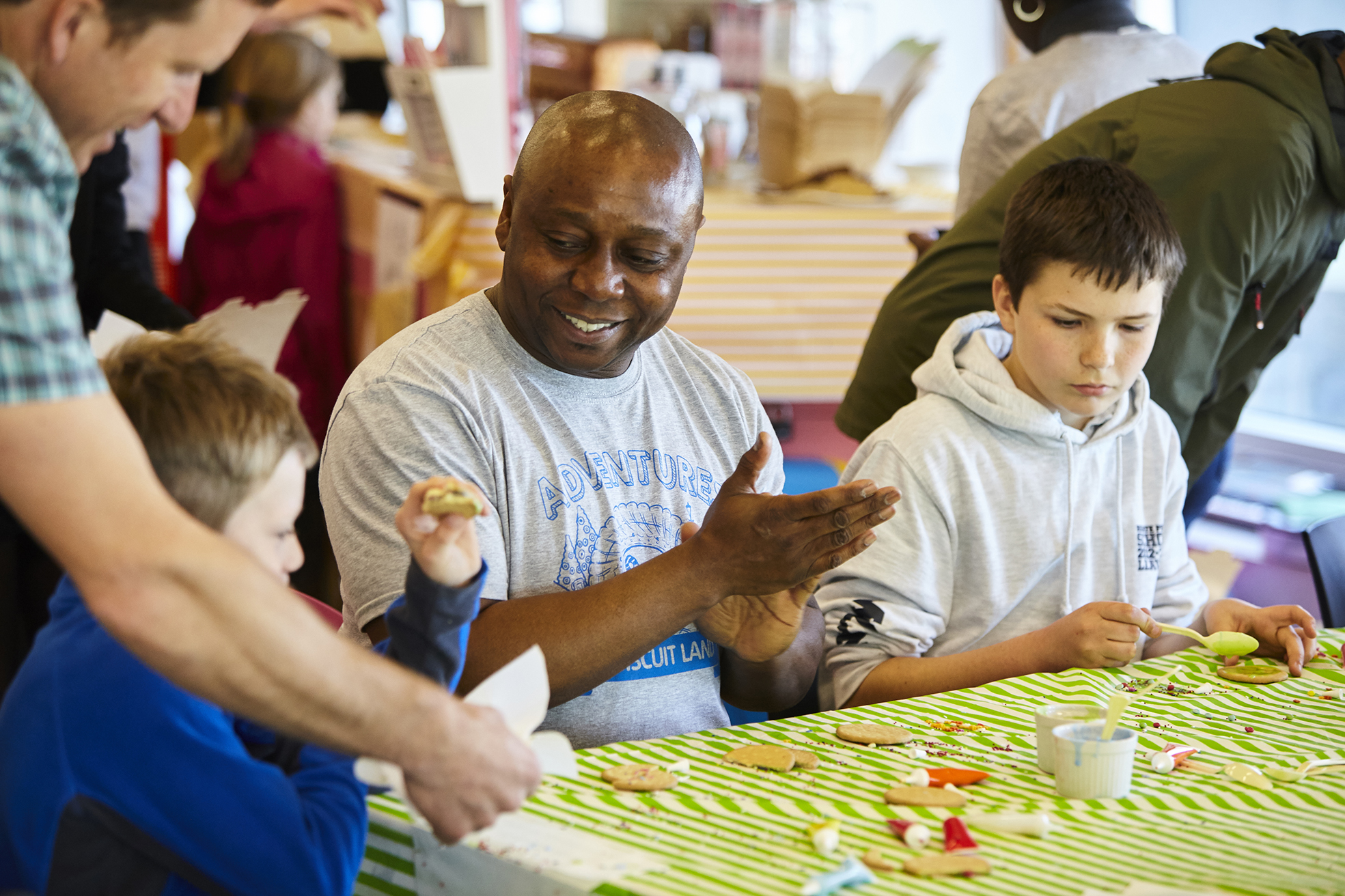 Hearing the news of David’s death floored me, and the feeling of sadness amongst the Touretteshero team and our colleagues at Oasis Play, where David was Project Coordinator, are huge. I can’t imagine the enormity of the heart ache his family are experiencing but I do know about the huge hole that his death will leave in the many communities he was part of. I wanted to write this not simply to give voice to my sadness, but in gratitude to, and in celebration of, a man whose extraordinary impact I feel lucky to have felt.

Leftwing Idiot and I first met David through Lambeth’s network of adventure playgrounds and through his work as a family support worker. We worked closely together at Oasis Play for many years and I can only think of one Touretteshero event in the last decade where David wasn’t involved – we used to joke about his comprehensive collection of Touretteshero event t-shirts. 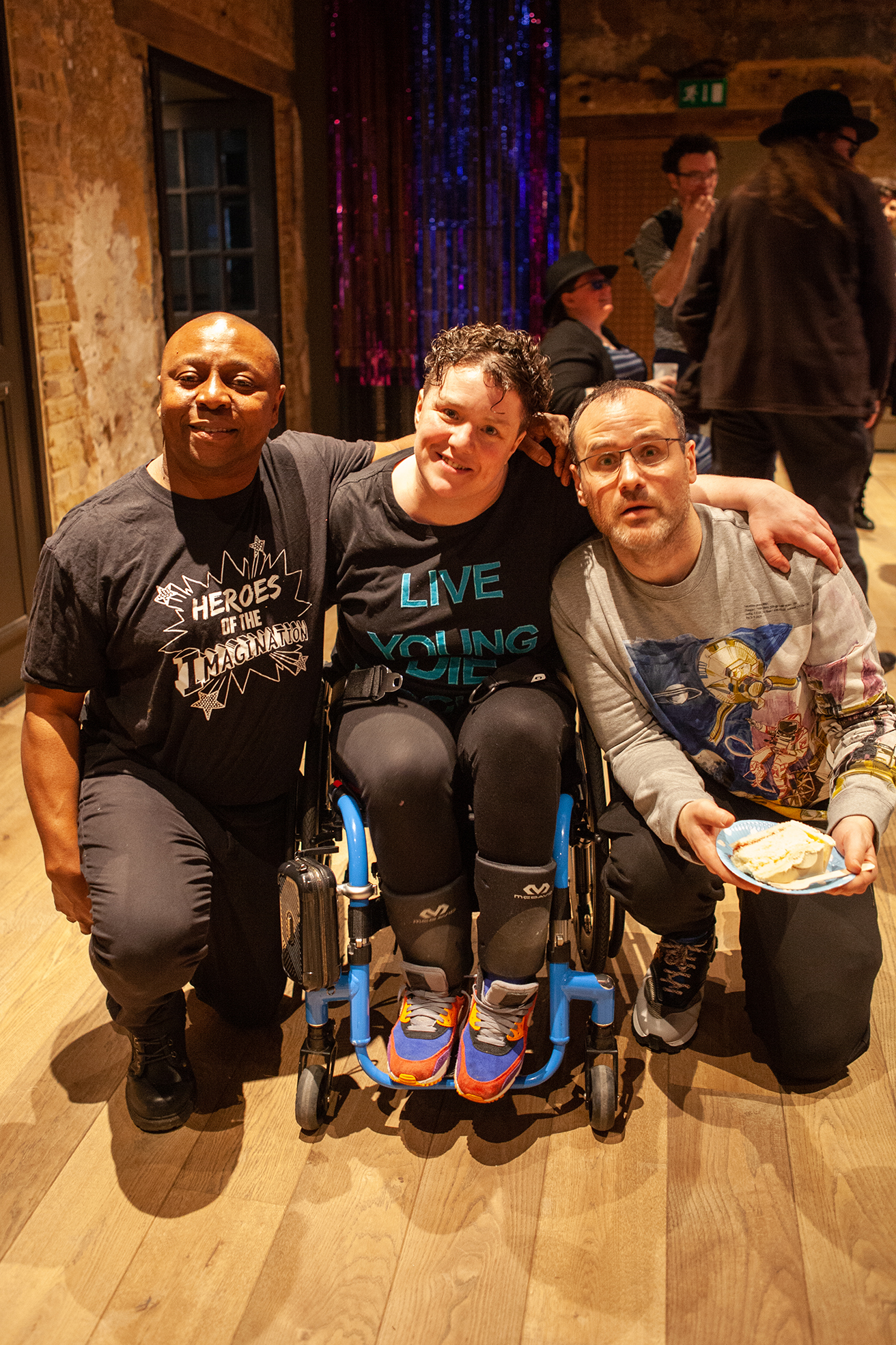 His role at these events was often as a roaming support worker – his extensive experience in inclusive play and his knowledge and intuition meant he was skilled at spotting people, young and old, who might benefit from a little extra support – whether that was a friendly conversation, a playful challenge, a thoughtful introduction, or a chair!

When I think of David, my heart fills up – I think of his quiet wisdom, his passion for play and his ability to connect with others. He was a bringer of happiness and knowledge, and I learnt a huge amount from him. Here are the lessons I value most:

Joy can happen anywhere – when I look at the many photographs of David at our events, he’s always smiling and nearly always playing! Whether that’s pillow-fighting in Tate Modern, being a superhero at the Southbank Centre or getting covered in confetti at Battersea Arts Centre. David’s skill as a playworker was unparalleled. He could build meaningful relationships with young people he’d just met, and he could instantly hold the attention of big groups of otherwise chaotic and excited children. He spotted and nurtured new talents in so many – children and adults alike. 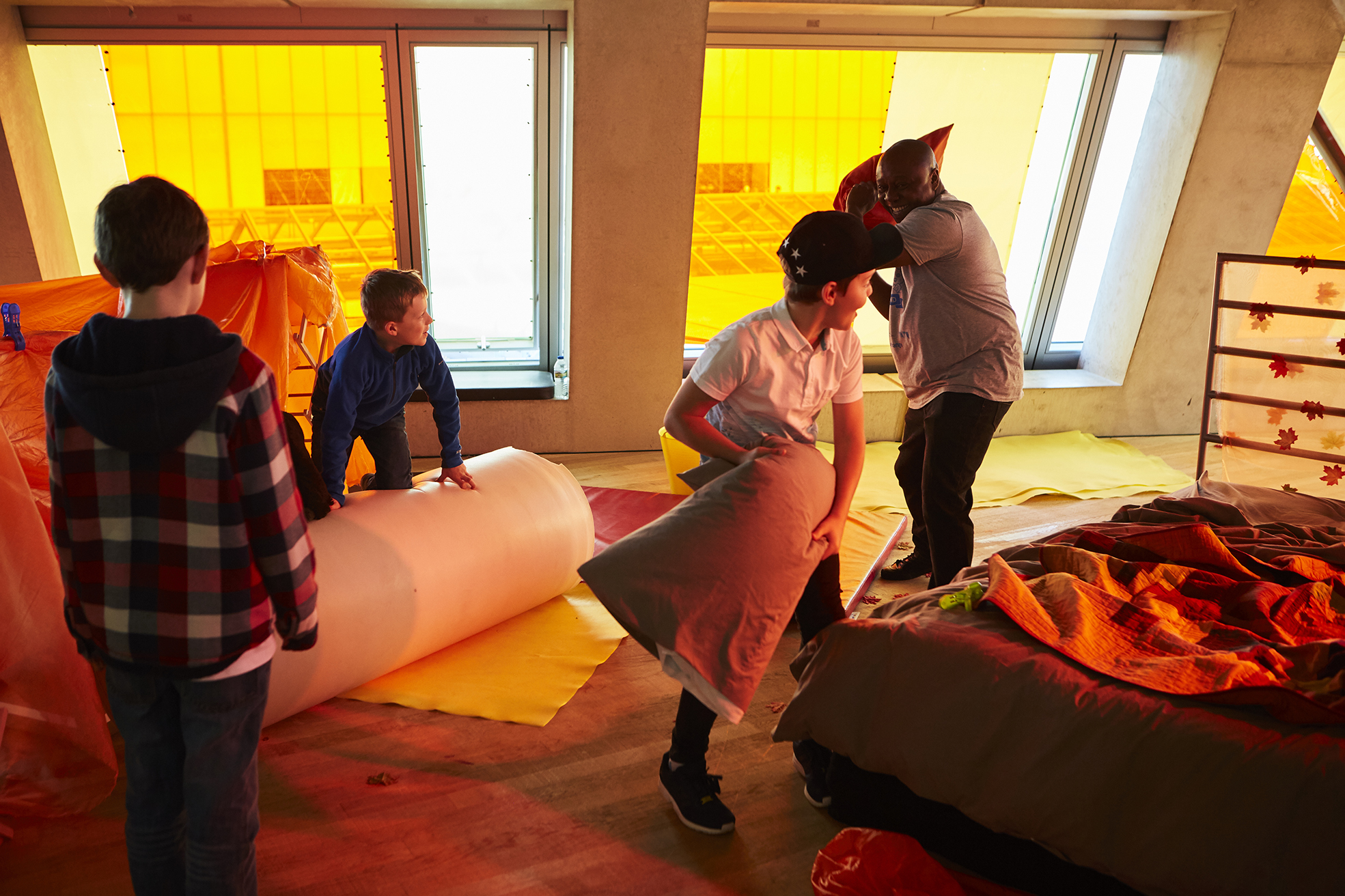 Keep your mind open – It seemed to me that David never stopped learning. He was brilliant at listening to other people and very curious about experiences different from his own. He was also extremely skilled at sharing his knowledge with others in the most understated ways. When he spoke, people paid attention because he spoke from a place of honesty and wisdom. He cared deeply about children and young people and invested his time and energy in creating meaningful opportunities for them.

When I saw a tweet this morning from another young people’s organisation, my first thought was ‘I have to tell David about that’. I’m sure there will be many others who’ll miss sharing new ideas with him, and the world will be worse off without his. 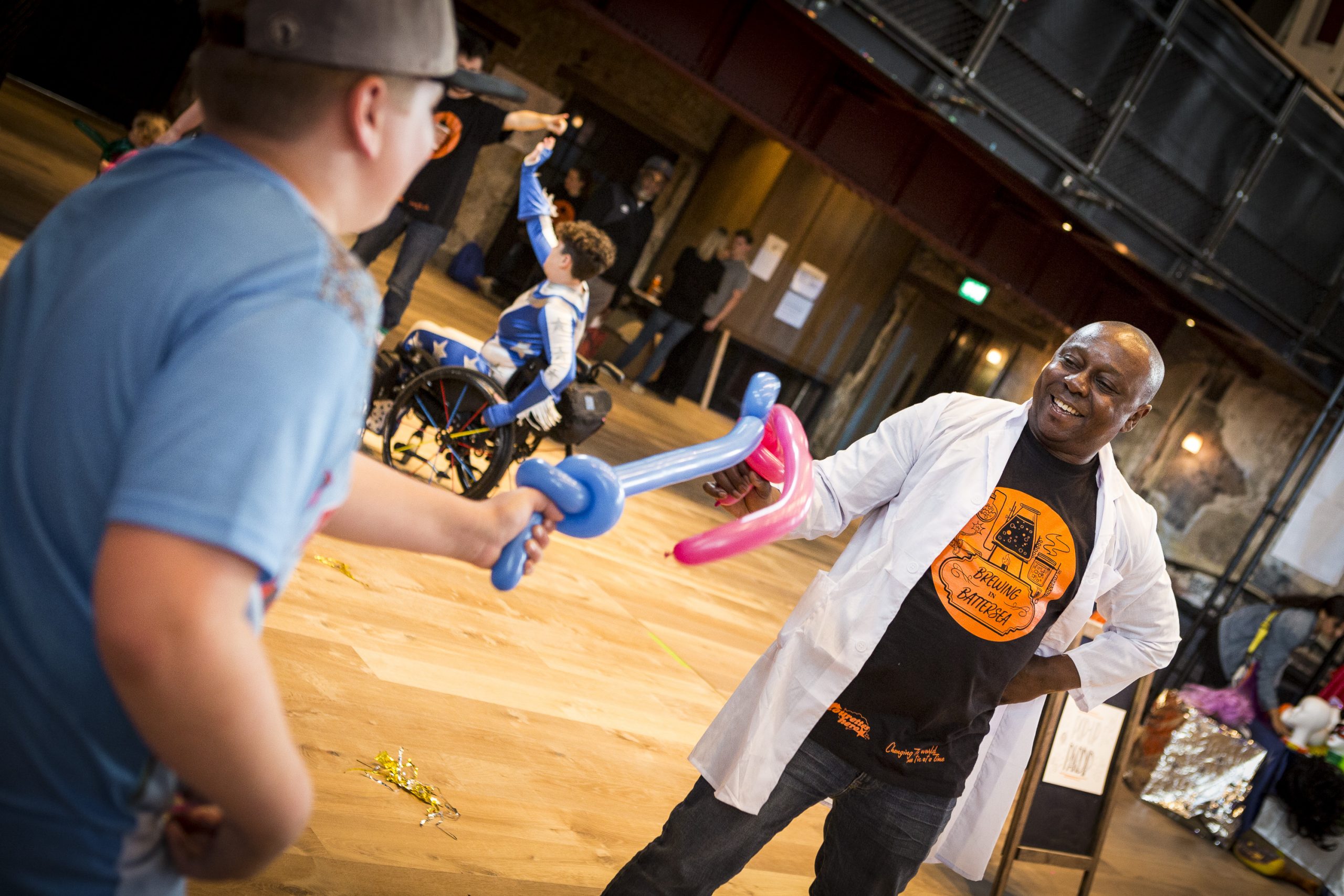 Celebrate each other – David spoke about his family with such love and pride. He went out of his way to recognise and celebrate the achievements of those around him and to use them to inspire others. He was playful and joyful, but he also had an unshakable commitment to making the world a fairer place. He did this by raising others up and by making amazing things happen for people and communities that are often overlooked. 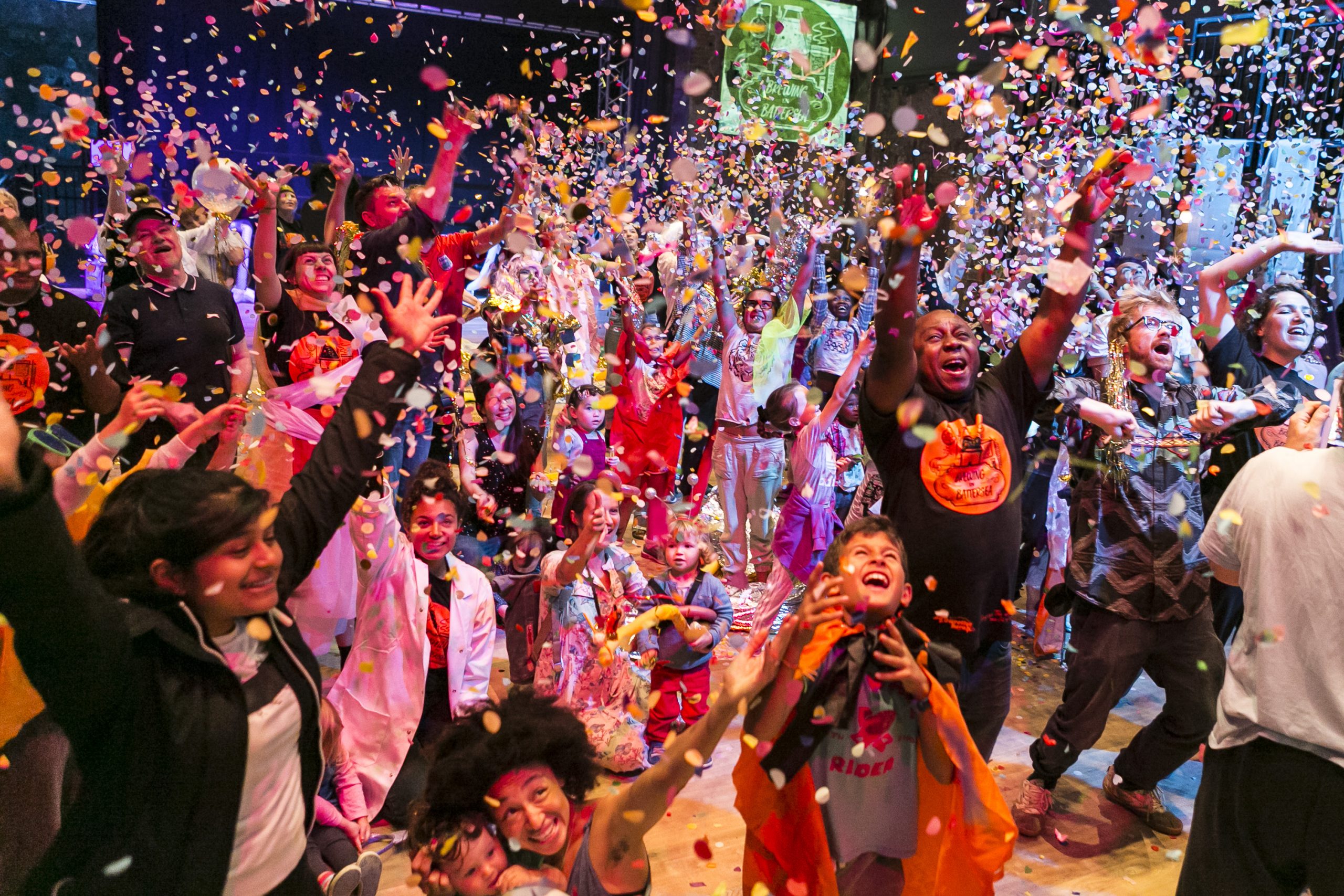 The last year has been incredibly difficult – there’s been a shocking and, in my view, avoidable loss of life. I’m writing this as a record of David’s importance, to acknowledge the way he helped shape my career and character and in recognition of his incredible talents – we need more leaders like David. While his passing is a huge loss, I know his wisdom, energy, skill, love and friendship will have a lasting legacy with everyone who knew him.

You can donate to a fundraiser for his family here.

My thoughts are with David’s wife, children and wider family – he will be profoundly missed.

If you’ve experienced bereavement and need someone to talk to, or are struggling with the impact of the pandemic, here are some organisations that may be able to offer help and support: