The other day, out of the blue, I got a call from a researcher asking if I’d be up for contributing to a radio segment on balancing work and Tourettes. I couldn’t do it because I was in rehearsals for ‘Not I’, which we are taking to New York in January.

I was curious why the researcher was suddenly so interested in the working lives of people with Tourettes and she explained that it was because there’s a new film out whose main character is an investigator with Tourettes.

The film’s an adaptation of the book, Motherless Brooklyn by Jonathan Lethem. I’ve known about this book for a while, but I’ve never read it. I’ve heard good things about it though, and as I’ve written before, having authentic characters that reflect the diversity of all our bodies and minds is really important.

Intrigued about the film I had a look online to find out more. As a disabled artist and performer I think a lot about whose stories get told and who gets to tell them. There were some aspects of Motherless Brooklyn film that worry me and speak to wider issues about how disability and difference is presented in arts and culture.

This isn’t a post I’ve particularly enjoyed writing and it feels risky to share my concerns. But it’s important for me to share my perspective, because how disability is represented has a real impact on our lives. I want artists, filmmakers and directors to understand the power and potential of telling stories in authentic ways.

This isn’t a review of Motherless Brooklyn, or a direct criticism of anyone involved. And it should go without saying that I’m not speaking for everyone with Tourettes. There are a number of complex interconnecting issues at play but I’m going to break them down into four areas. 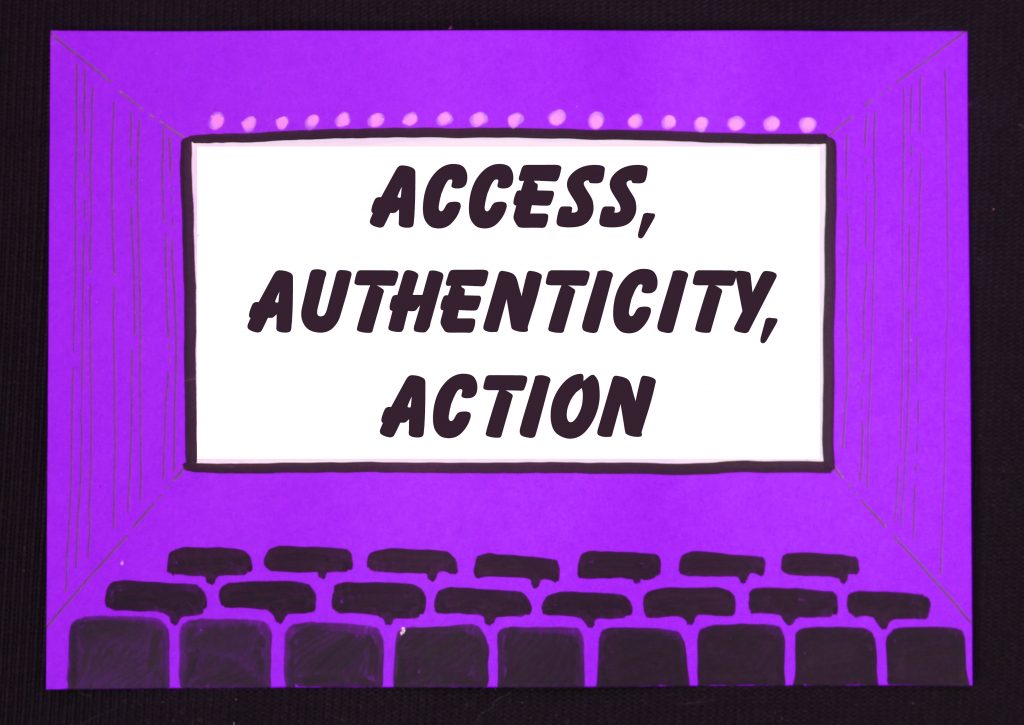 1) If You’re Making Work about Disability, Make Sure it’s Accessible

I haven’t seen this film, and I’m unlikely to be able to anytime soon because I find going to the cinema very tricky because of my tics. In fact, I haven’t been to the cinema in over a decade. I looked for ‘Relaxed Screenings’ of Motherless Brooklyn but couldn’t find any. This alone sends a clear message about who the film is for and who it’s not for. If you make any sort of art about disability or neuro-diversity it’s essential to understand and address the barriers that make it hard for people from those communities to attend. I think there was a screening of this in London organised in partnership with the charity Tourettes Action but even this wasn’t described as a relaxed screening, and one screening certainly doesn’t equate to equal access.

It’s understandable not to know what the barriers might be, but it’s essential to ask, listen and address these wherever possible. Avoid assumptions, and don’t expect disabled people to share their knowledge with you for free: value expertise and invest in access.

2) All Audiences Include Disabled People

One in five people in the UK identifies as disabled – it isn’t a niche issue. Despite this, TV and films about disability often seem to assume that everyone watching will be non-disabled and have a normative body and mind. While I haven’t been able to watch Motherless Brooklyn I have had a look at the trailer and listened to interviews with Edward Norton who’s the lead actor, the producer and the director.

In the UK alone there are around 300,000 people with Tourettes, so it’s not a rare condition. If your school, workplace or community doesn’t include disabled or neurodiverse people, it suggests to me that there are barriers to equal access.

The most telling line of the interview was when Edward said he thought that people watching it would think, “Thank God I’m on this side of the line because if what was in my head was coming out I’d be in trouble.”

This tells me three things:

It often feels as if we’re expected to be grateful for any ‘awareness’ or ‘discussion’ around disability. Disabled people should make up a part of any audience and we’re being short-changed by a failure to reflect the diversity of our experiences.

I’ve written before  about the practice of non-disabled actors playing disabled characters. Whenever this comes up I tend to get lots of comments like, “It’s an actors job to play different people”, “They needed a big name to sell the film”, “Does that mean only serial killers can play serial killers now?” or, as was said to me at a recent event, “Anyone should be able to play anyone.”

In an equal world where there are no physical, systemic or attitudinal barriers, of course anyone would be able play anyone, but that’s not the world we live in. While disabled people make up 22% of the population, figures from Ofcom show that we make up only 3% of employees across the UK’s five main TV channels. A report by University of Southern California’s Annenberg Inclusion Initiative shows that in Hollywood things are even worse, with only 1.6% of speaking characters in the top 100 movies of 2018 depicted as disabled. This study doesn’t say how many of these characters were then played by a disabled actor, but an earlier study found that 95% of disabled roles were played by non-disabled people. And if disabled actors are this unlikely to be cast in the small number of roles that specify an impairment it’s extremely unlikely they’re being considered for roles where disability isn’t mentioned. The playing field is far from level and authentic representation is extremely rare.

Edward Norton plays Lionel, the character with Tourettes, but he doesn’t have the condition himself. In the interview he describes the role as, “a great challenge for an actor.” He then goes on to describe “the work of rehearsing and going through that phase where it all feels inauthentic and like faking it and getting into a groove.” It seems that the ‘challenge’ is not in understanding and portraying Lionel’s character but simply mimicking his impairment. I know loads of talented actors with Tourettes who’d have jumped at the opportunity to take on such a role and who wouldn’t have needed to spend any time inventing and rehearsing tics.

Lots of people pretend to have Tourettes, YouTube’s full of them. I can pretty much always tell if someone really has tics or not, and this was certainly true watching the trailer for Motherless Brooklyn. Similarly, I can usually tell when a non-wheelchair user is playing a wheelchair-using character – it’s jarring and makes it hard to buy into the story. When people mimic tics they always start with the outwardly visible movement or noise and this is what gives the game away. Real tics start with a strong internal sensation, and what’s absent from Edward’s performance, and from every other performance I’ve seen by actors without tics, is the sense of that driving sensation.

Disabled people are seriously underrepresented on stage, screen and behind the scenes. Our cultural spaces are frequently non-accessible, and disabled actors aren’t being invested in, whether in terms of roles, training, or accolades. For this to change we need writers, directors and producers to be allies, and to cast bravely and with imagination. It isn’t that there’s a lack of talent amongst disabled people or that our exclusion from mainstream culture is ‘natural’ – it’s that talented disabled people are not being connected to opportunities. This is something that everyone within the arts and media sector can and should help change.

One of the risks of telling stories about particular experiences without involving those groups in the writing and production process, is that stereotypes are re-hashed. There are many clues within the trailer, the interview and the promotional material for Motherless Brooklyn that it’s not a film that draws on lived experience. From the lack of Relaxed Screenings, to the use of the phrase ‘afflicted with Tourette’s”, to the idea that “Like Forest Gump or a Rain Man” this is a film about an underdog. Forest Gump and Rain Man are both notoriously unhelpful presentations of neuro-diversity and while Tourettes can be an isolating condition to live with, we are not underdogs.

Disabled people face frequent discrimination, often as a direct result of assumptions about what it means to be disabled. Stereotyped characterisations reinforce these ideas and have a real-world impact. As long as disability narratives are written, produced, and performed by non-disabled people, they’re at risk of rehashing boring clichés about what disability actually means.

I know from my own experiences how important it was to see people that looked, sounded or moved like me achieving in all sorts of roles. It was seeing the work of disabled artists like Francesca Martinez, Liz Carr and Mat Fraser that gave me the confidence to feel that it was something I could do too.

At a time when disability hate crime is soaring and loneliness amongst disabled people is at epidemic levels it’s crucial to be more demanding of the film industry. I don’t want journalists to consider someone with Tourettes having a job as newsworthy. I don’t want to be writing long posts justifying my inclusion in the world. I want to be at the cinema with my friends enjoying varied, nuanced, authentic characters.

Our bodies, lives and stories are not just plot lines to be used and discarded, they’re part of individual and collective identities that should be respected and valued.