In November 2015, when a woman in a derelict building in west London started a countdown, my heart raced – as I’m sure a print-out from my pacemaker would testify. Kirsty Wark had just emerged from round a corner after finishing her very professional intro to the next piece of live theatre to air on BBC Four as part of Live from Television Centre. Thirty minutes later I was leading a choir, three giant cats, a brass band, and the late Keith Chegwin holding a massive toothbrush, in a song written by my tics – you can still watch a clip of this grand finale here on the BBC website.

Being part of this event and making Broadcast from Biscuit Land, an adapted version off our stage show, was one of the proudest moments of my life. In just three years I’d gone from being banished to a sound booth during a theatre performance because of my tics, to performing live on the BBC.

Tonight feels like another momentous occasion: our film Me, My Mouth and I will be shown on BBC Two at 10:45pm. This film follows me as I tackle my most ambitious project yet, staging a neuro-diverse version of Samuel Beckett’s short play Not I. 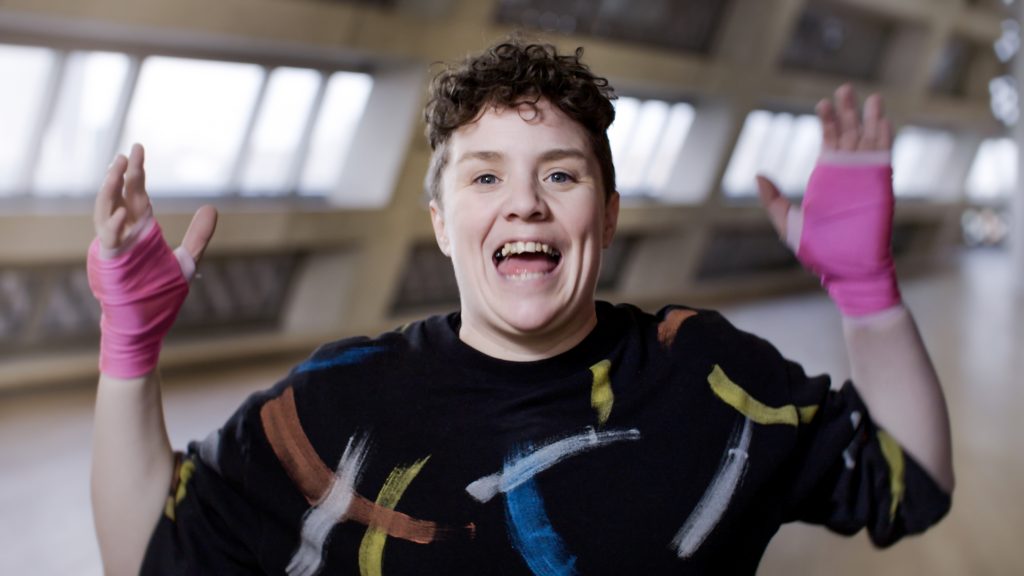 This film’s part of Performance Live – the successor to Live From Television Centre. In order to make it, Touretteshero became a TV production company, which meant we got to choose our team including our brilliant director Sophie Robinson. This gave us much more say in what was filmed than we might otherwise have had. Excitingly, we were able to talk about disability in ways you don’t often get seen on TV. The other unexpected upshot of being a production company is that I now know way more about television insurance and compliance than I’d ever have imagined!

Working with Sophie, our producer Amelia, camera operator Ollie, sound recordist Justin and the rest of the team was an amazing experience. They were with me all the way as we rehearsed and got ready for opening night.

Not I needs to be delivered with speed and precision, so to help me prepare I talked to legend of UK Hip Hop, Rodney P (which left me slightly star-struck for the first time ever). Apart from Rodney, the only other man who speaks at any length is Leftwing Idiot (who goes by a different name in the film). 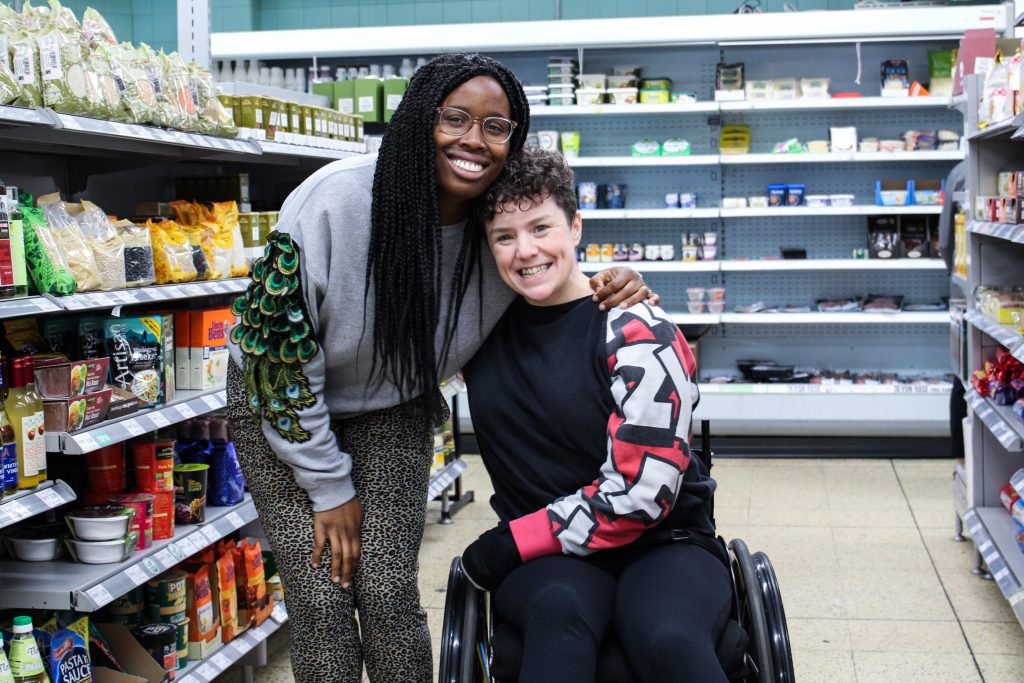 The other ten people who feature are all women, many of whom are also disabled. These include my good friend Ruth, Beckett scholars Derval Tubridy and the late Rosemary Pountney, our brilliant British Sign Language consultant Deepa Shastri, and our amazing BSL performer Charmaine Wombwell. I also interviewed comedian, actor and disability-arts legend Liz Carr in a very unusual location, and spoke to researcher and fellow wheelchair user Jessi Parrott. I was also excited to meet disabled MP Marsha de Cordova who’s making change at the heart of power and politics.

Talking about the experience of being neuro-diverse (having a brain that works in ways that differ from what many people expect) and helping to increase understanding of the barriers disabled people face is essential for me. I’ve seen too often the horrific damage negative perceptions can create. The interview I’m most proud of in the whole film is with Tania, the mother of my funny, compassionate and much missed friend Amy.

There are loads of people who helped us make Not I who don’t appear in the film for very long but who played a crucial role – creative associate Ria Parry, our amazing design team, the Beckett Estate, my support workers, the crew at Battersea Arts Centre, and Ethan who’s twelve and also has Tourettes – look out for him dancing and leading a brass band in Brewing In The Basement, our event last year.

We were all really keen that our film should be as accessible as possible so we experimented with embedding audio description as we went along. This means that you’ll hear people describe themselves so that anyone who can’t see knows a little about the person who’s speaking.

I’m very proud of the film we’ve created and I’ve enjoyed the process of making it a great deal. Instead of Kirsty Wark, this time Russell Howard kindly agreed to do the intro. I hope Me, My mouth and I introduces new people to Samuel Beckett’s work, and to the dynamic and varied world of disability arts and culture.

For years I’ve been desperate to see the sort of experiences I have as a disabled person represented on TV, not showing disabled people as tragic victims or as inspirational heroes but making our lives visible in all their richness and complexity. I hope our film does some of this and that there will be more disabled-led production companies in future. 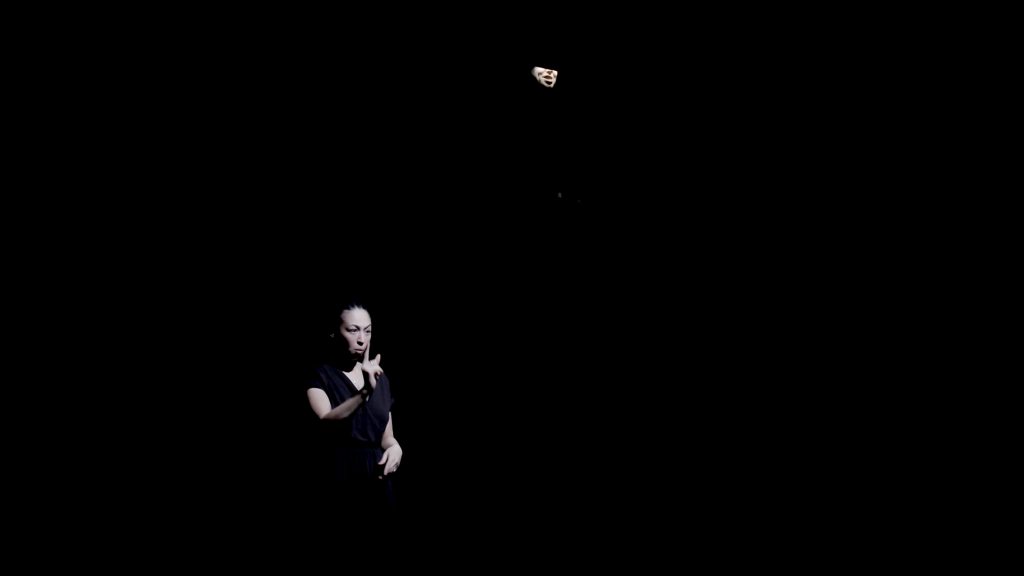 If the film whets your appetite and you want to see our production of Not I in the theatre, we’ll be touring this autumn and next spring, so look out for dates here. We’re also holding another big Brewing event, this time at Battersea Arts Centre, on Thursday 30th & Friday 31st August – there will be activities for children and families during the daytime, and on the evening of 31st there’ll be a cabaret celebrating disability culture. Brewing In Battersea will be a ‘relaxed event’ with BSL interpretation, roaming audio description, a changing place toilet, and chill out space. A social story for these events will be available soon

I’ll be watching the film as it airs tonight with my friends and family and I very much hope it’s as enjoyable to watch as it was to make.