It wouldn’t take a very detailed reading of this blog to discover that I haven’t been very well for the last few months. I’ve been adjusting to life with chronic pain, nausea and fatigue. It doesn’t sound like fun, and there’ve definitely been times when it’s felt miserable and lonely. But bear with me – this isn’t a miserable post.

It’s actually a post about teamwork, about trust, about mutual support and about how crucial these elements are to making great things happen. Over this period I’ve been adjusting to the new demands of my struggling body, and that’s also true of the brilliant team of people I work with. Together we’re making sure Touretteshero’s mission to mix things up continues. 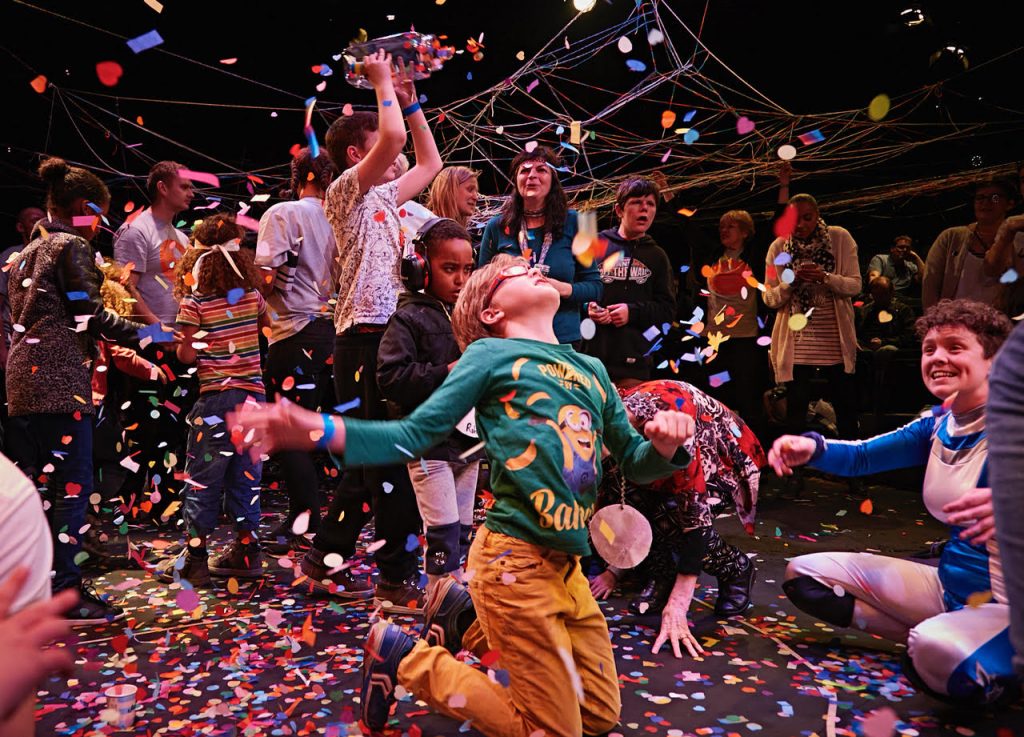 All photos by: James Lyndsey

The Touretteshero Team, supported by the Barbican Centre and a line-up of great disabled and non-disabled artists, has held Brewing In The Basement, two days and one night of collaboration, exploration and performance.

By day we turned the Barbican’s Pit Theatre, nearby foyers and warren-like backstage corridors into a playful, accessible space where children, young people and adults could play, make, and experiment together with artists.

When people arrived we gave them a plastic test tube and set them a simple mission to go and get involved with the artists, explore what it means to be creative and collect sensory ingredients to mix up their own unique creative potion using their test tubes. 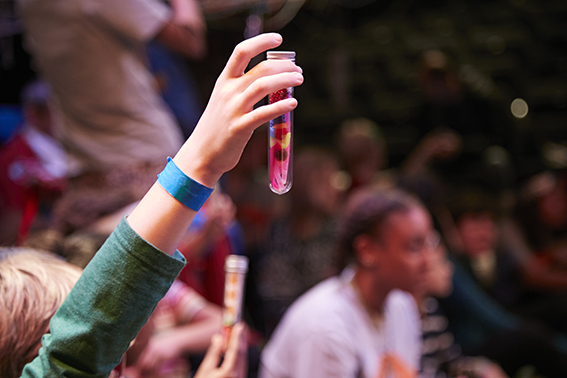 Immersive theatre company Loki created a glittery floor maze to weave the spaces together. They also started a woollen web that grew and stretched in incredible ways. 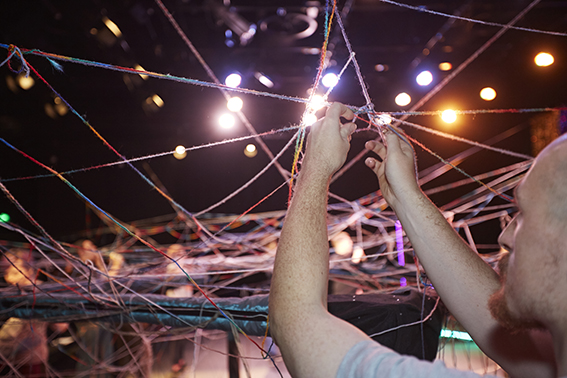 Loki’s strange helium octopuses bobbled about in the foyer and everyone from tiny babies to towering adults played with them. I particularly enjoyed watching a crowd of documentary buffs who’d arrived for a sold-out screening in the nearby cinema negotiating the bobbling balloons and the games that had formed around them. 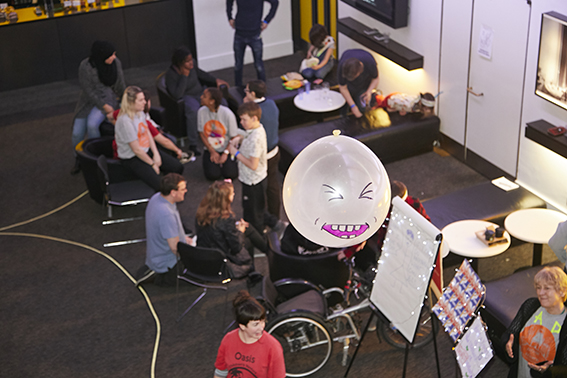 Also in the foyer the team from PERKY helped people express themselves through costume making: incredible sashes, badges and headbands were created. While making their wearables people chatted, shared ideas and made new friends. 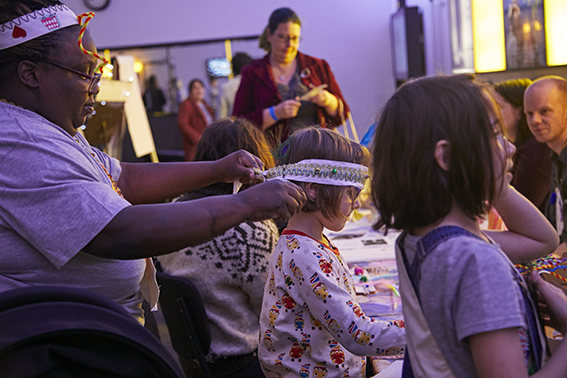 The sound of an amazing party drifted in and out of focus as I wheeled through the subterranean corridors. Youth-led theatre company Sounds Like Chaos were hosting the Pit space with constant karaoke, party tricks, and performances from the company of talented young performers and from everyone else who was taking part. 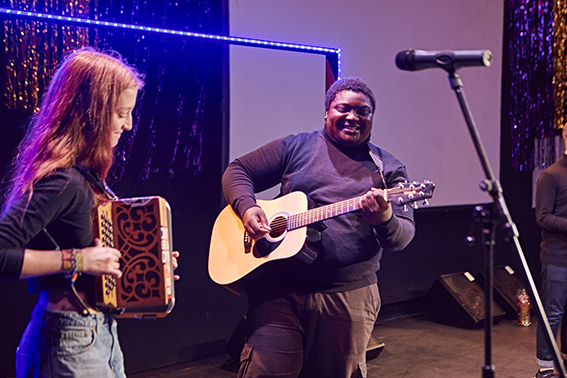 The Sounds Like Chaos crew kept the energy going in a beautiful and sensitive way, creating opportunities for all sorts of people to get involved, in their own way, and at their own pace. 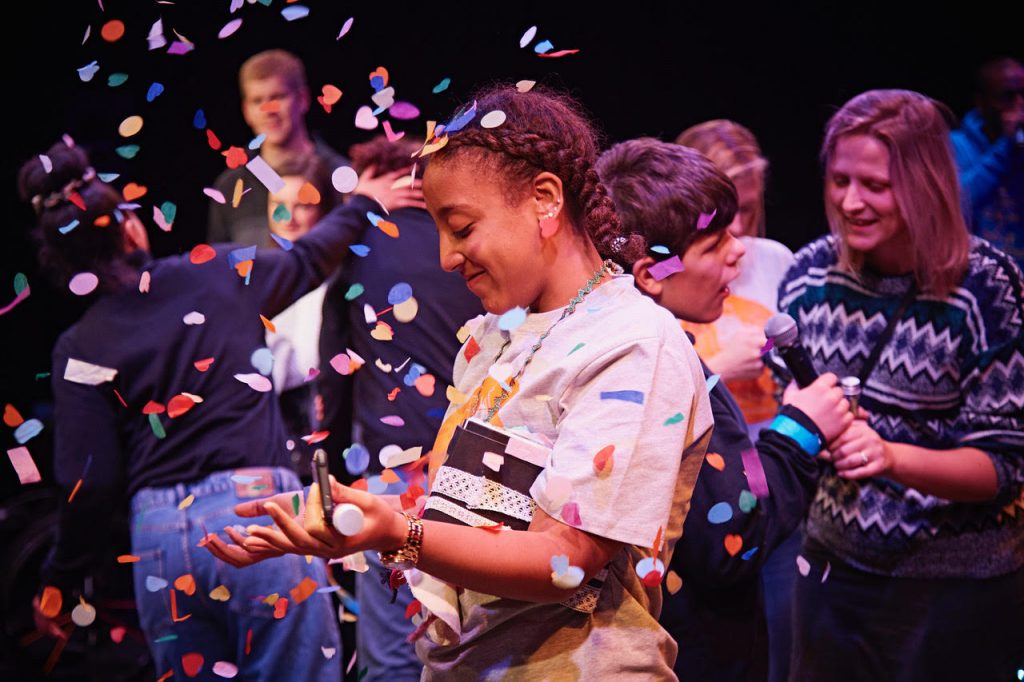 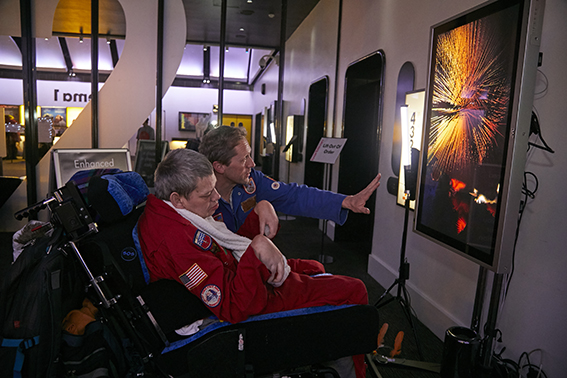 Kimatica‘s magic mirror installation provoked some radical dance moves as people watched their reflections being distorted in unexpected ways. I watched with joy as volunteers from the Limes College in Sutton theatrically captured people’s dance moves in their test tubes. 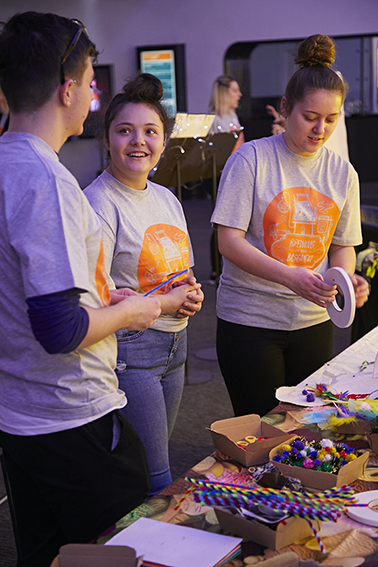 That’s not all the Limes College students got up to – they helped visitors find their way about and get stuck into all the activities, and they were also crucial as the day moved into the evening, helping with quick changes to the spaces.

The daytime activities culminated in our Bubble Up Parade, when all the creativity and energy we’d been brewing burst out upstairs. Accompanied by four members of the brass band Brasstermind we danced and paraded through the busy Barbican Centre encouraging everyone we met to get involved too. 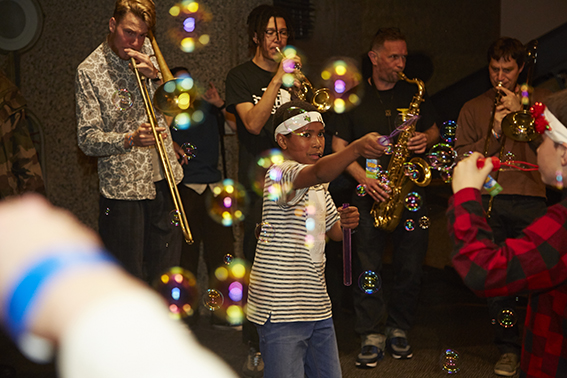 To finish we shouted out our ideas and messages up into the heights of the Barbican and blew bubbles to help them float out into the world.

After a quick re-set the Pit transformed from child-friendly play space to an accessible cabaret bar. Sounds Like Chaos got us started with their fantastic Clickbait Karaoke which was in turn joyful, funny and thought provoking.

Amelia Cavello, a multi-talented blind performer, shared her audio-described burlesque routine exploring sensuality, followed by birthday boy Captain Hotknives who did a glorious set that included the classic Hotknives tunes: ‘Anti Gravity Cats’ , ‘Shabby Muffin’ , and ‘MRSA’ – a re-working of YMCA with a slightly more infectious theme. He also sang a song about pigeons that involved the whole audience making cooing noises that sounded like a lot like people rolling their rrrr’s, something that always over-excites my tics.

After a quick interval BSL poet Donna Williams expanded our visual vocabulary with two incredible poems, and PERKY founders Ono and Holly talked about their mission to make sure that learning disabled women get opportunities to talk about womanhood and their bodies, and to learn from each other. Legendry band the Fish Police were our penultimate act, getting the audience onto the dance floor with brand new material as well as some old favourites.

By the time they’d finished my body had too, so the microphone came to me for a mat-based finale. I lay on the ground and sang ‘Share the biscuits not the crumbs’ while Team Touretteshero distributed actual biscuits. DJ Sufficiently Compact Mass played us out with some top tunes.

It was a memorable but exhausting day. Throughout I was sensitively and unfailingly supported by my PA Ellie. While Brewing In the Basement brought together the talents and creativity of many people it was held together by the energy, skill and resourcefulness of our producer Innes, production manager Sophie, co-director Will, and by the Barbican’s theatre and technical team, particularly stage manager Lou. Leftwing Idiot wasn’t with us in person but I felt his influence throughout the day. 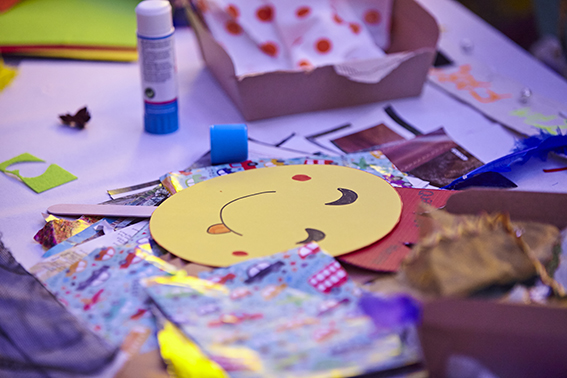 Two of my favourite anecdotes involved what was happening backstage, The Royal Shakespeare Company were teching a new show in the main theatre upstairs. During their breaks members of this company came and mingled, exchanging experiences and tips with Sounds Like Chaos, and watching an episode of The Fresh Prince of Bellaire with Captain Hotknives – not only were we mixing things up front of house, we were also doing the same backstage too.

A year ago when we brought Backstage In Biscuit Land to the Pit we were brand new to the Barbican. Twelve months later we were back but this time with creative reinforcements made up of amazing companies from the disability, festival and youth arts scenes who’d never performed at the Barbican before. I very much hope that like us they’ll be invited back and that together we’ll continue to mix spaces up to make sure they’re truly creative and accessible.

As a child I went to the Barbican’s Children’s Library once a week with my school. I loved the library but it was also one of the first places I started to feel as though I stood apart from my peers, and not in a good way. I couldn’t spell my surname, or zip up my own coat at the end of the session, and I had to walk to and from the building with a teacher so that I didn’t walk into the road – or into any lamp-posts. 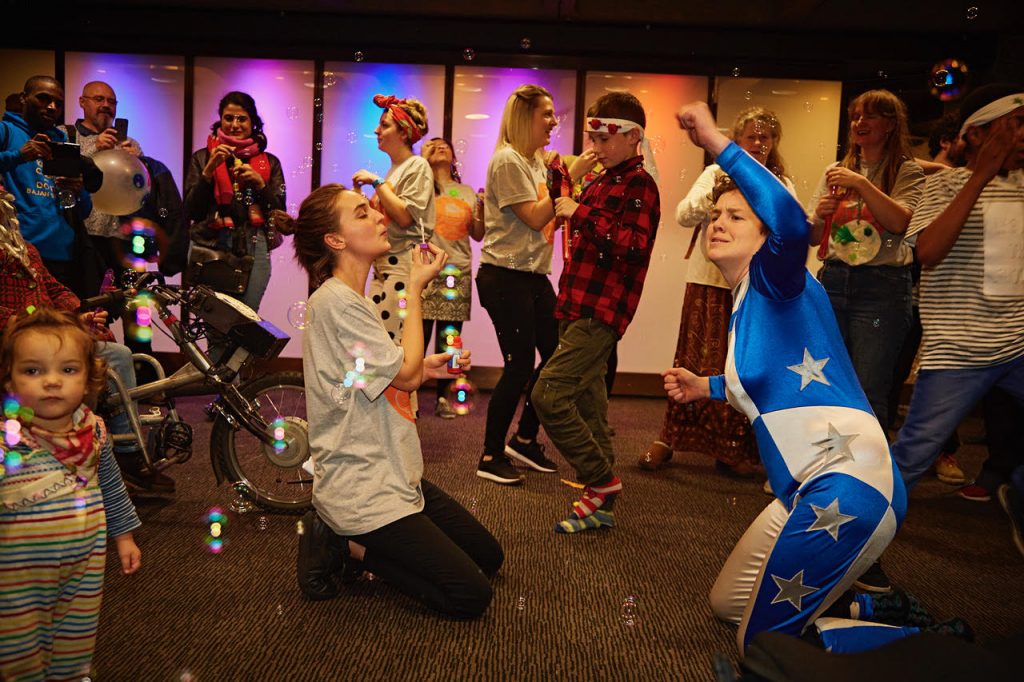 I don’t think I’d ever have dreamed that when I grew up I’d be invited to dance through the Barbican’s foyers with a load of kids and a brass band – as a job! I hope that some of the children and young people who came with us yesterday will be back, too, as future artists, writers, directors and performers.

No dancing for me today though – just some good, solid, lying in bed.