Touretteshero’s had a birthday party in the past, and has delivered lots of events, but we’ve never had a team party before, and that’s because until recently we were mainly just a team of two, Leftwing Idiot and me.

Not anymore though. In the last year Will has joined us as a director and Innes is working as Touretteshero’s company producer, keeping everything on track. We’re also making a film about our latest theatre production ‘Not I’ so we’re also working with a TV producer, editor and director too.

Tonight was our Touretteshero team Christmas outing, and we celebrated by going to see a show together – a relaxed performance of Thirty Christmases, a show by our friends Jonny and The Baptists. 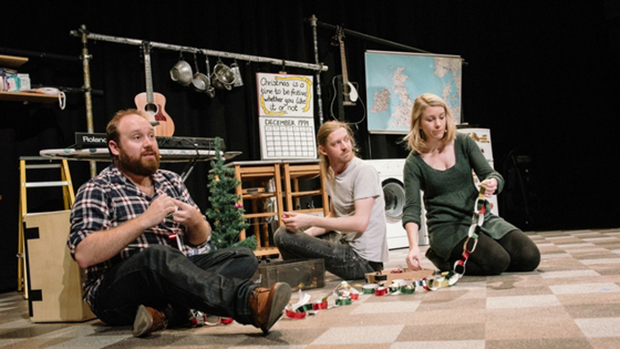 The show was great! A funny, moving, festive tale about, family, love, arguments, having a place to call home, and fish puns. There were loads of catchy songs, including one with the chorus “Everyone’s having sex with reindeers again.” As this song drew to a close my tics shouted out, “except Keith Chegwin”.

There was an audible intake of breath from some audience members while others laughed. To lots of people this outburst probably seemed unfeeling and deeply inappropriate coming so soon after the sad death of TV presenter Keith last week.

For me though, this tic felt poetic, part of a cycle in which Keith Chegwin’s popped up and popped out at many key moments of my life. He’s been a regular feature of my tics for several years and at the first relaxed performance I ever went to back in 2013 – an X-rated version of Beauty and The Beast – I involuntarily and inaccurately shouted, “Keith Chegwin is dead” as Beast lay motionless on the floor.

It was at this show that I first met Jess Mabel Jones (AKA Chopin) who was performing in it. We had a drink afterwards, became friends and went on to make a show together – Backstage In Biscuit Land. In the show Chopin tells the story of how we first met, including the Keith Chegwin tic.

Two years ago when we made a version of Biscuit Land for BBC4, Keith came and watched in person and got involved in our grand finale.

Since 2013 the relaxed performance movement has gone from strength to strength with many more venues and performers taking a relaxed approach, helping to make sure that theatre is a space everyone can enjoy. Keith Chegwin was incredibly supportive of this work and it felt totally right to me that he got another mention tonight.

Thirty Christmases is a show that acknowledges that this time of year can be tough for lots of people, particularly those grieving, or without enough to eat, or without family to be with, or a home that’s safe and warm. It’s also a show full of humour, hope, and joy and it’s a vital reminder of the importance of sharing what have with others. I reckon Keith would’ve have approved.