While my tics might not be part of my conscious thought processes, they definitely reflect the time and cultural references of my childhood, and this means that the stars of 1980’s children’s TV get a strong showing.

Of all these 80’s celebrities, the one who’s been a consistent and longstanding feature of my tics is Keith Chegwin. He’s ridden on hippos, been a Russian princess and had a strange relationship with a mongoose.

Most famously I involuntarily and prematurely announced his death during an X-rated version of Beauty and the Beast at the Young Vic. It was at this show that I first met my Backstage In Biscuit Land co-performer Jess Mabel Jones, and the story of that particular tic features in the show.

It’s with huge sadness that I learnt of Cheggers’ death today. By a strange coincidence this news popped up on my support worker Lily’s phone just as we were writing a Christmas card to him.

Back in 2015 when we made a version of Biscuit Land for BBC4 we were lucky enough to work with Keith. He came and watched the show in the audience, and then, with great enthusiasm and grace, got totally involved. During our grand finale he led the Hackney Colliery Band while waving a giant toothbrush representing the NHS, with dancing biscuits and inflatable cats bobbing about all round him. 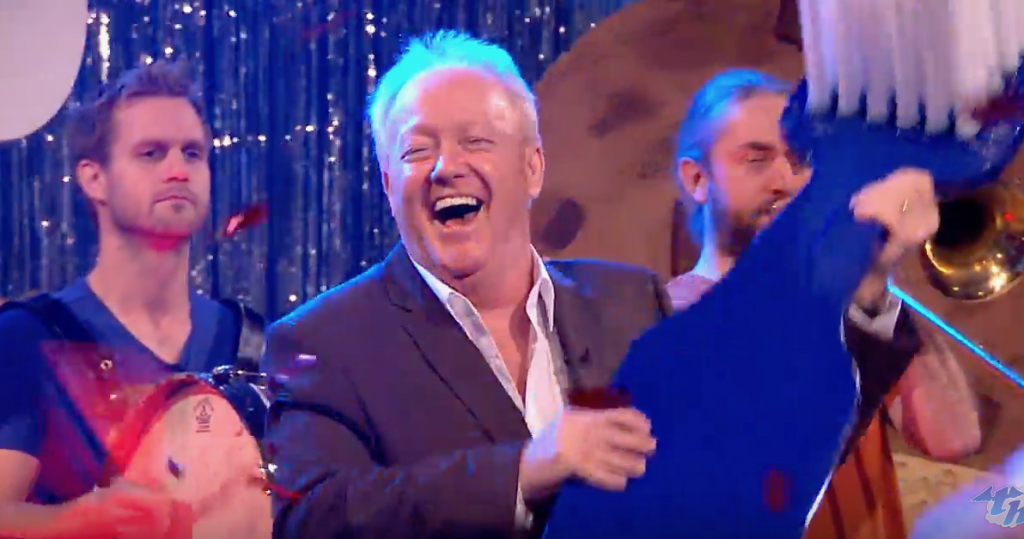 Our experience of working with him was a total pleasure – he was patient, professional and a great sport. Trying to explain what we wanted him to do on a conference call remains a particularly strong, surreal and treasured memory. I feel very lucky to have met and worked with him.

I’m sure Keith will continue to live on in the memories of all those who grew up watching him, and I’m also sure he’ll continue to feature in my tics.

Keith won over the whole of the Touretteshero team, and we send our love and thoughts to all his friends and family.