On Christmas day, after all the food had been eaten, the presents unwrapped, and with the festive telly murmuring away in the background, something magical happened: I found a pig sticker.

It was in the hall, tucked into a nook. 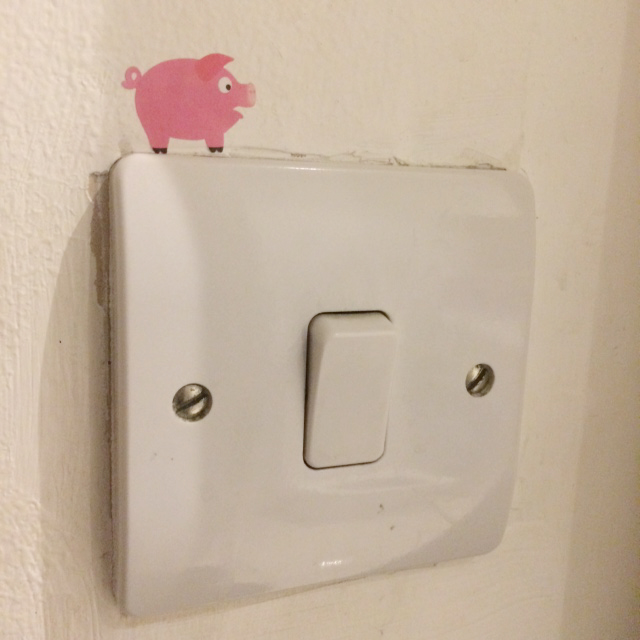 Then I found another, and another. It quickly became clear that the Pig Fairy had called!

Now there might be some people reading this who are unfamiliar with the legend of the Pig Fairy, so here’s a potted history.

In 2011 I began experiencing sudden intensifications of my tics several times a day and I called these episodes ticcing fits. Over the last few years they’ve decreased slightly and on some days I don’t have any at all. On my first fit free day I was given a squeaky dog toy pig that made me inexplicably excited, and I went on getting highly decorated piggies for my next twenty-four fit free days.

These aren’t marked with pigs any more but I do often talk about pig stickers! And now I have lots of them. They’re hidden on grab rails, on sofa legs, in the bathroom and by my bed. Earlier today I found one on the intercom, and when King Russell found one on the front door I instructed him to bring it in from the cold.

So far I’ve found fourteen stickers hidden in the castle but Leftwing Idiot seems to think that the Pig Fairy might’ve left fifteen. I have no idea how he’d know – he’s always been a pig sticker sceptic.

While other people have been eating pigs-in-blankets I’ve been counting pigs in the castle – and I certainly wouldn’t want it any other way.

One response to Stick Up Pigs