“Biscuit” has been one of my regular tics for many years. I don’t know exactly when it started, but by early 2011 I was very biscuity! I once worked out that I tic “biscuit” about 16,000 times a day, so unsurprisingly it’s a word that lots of people strongly associate with me. It punctuated the speech I gave when my sister got married and it peppers the bedtime stories I read to my niece. I often describe the surreal world my tics create around me as Biscuitland.

Biscuitland moves about with me and it’s not somewhere I inhabit alone. There’s a whole team of personal assistants and support workers who make it possible for me to live and work safely and independently, and a close group of friends and family mean it’s a place of love, laugher and joy. But life in Biscuitland can also feel precarious, and without the right support it would crumble quicker than a Hob Knob dunked in tea.

Because I’m a disabled adult who has 24-hour support, people sometimes assume I lead a tragic life, but this very far from the case. It’s no surprise that some people think this way because bodies, brains and lives like mine are rarely shown on TV, except during emotionally manipulative fundraising events or on documentaries with sombre piano music.

On the rare occasions disabled characters are present in comedies or drama, we tend to be shown as either heroically independent, or as passive plot devices within other characters’ lives. I can’t think of a single time when I’ve seen on TV the funny, complex, nuanced relationships like the ones I have with the people and systems that support me.

For the last few years, we’ve been working on a project which we hope will change this. It’s been a long process with plenty of challenges, but I’m super-excited, at last, to share a short pilot episode of our new TV sitcom, Biscuitland.

You can watch it online at All4 here. The BSL signed version is here. 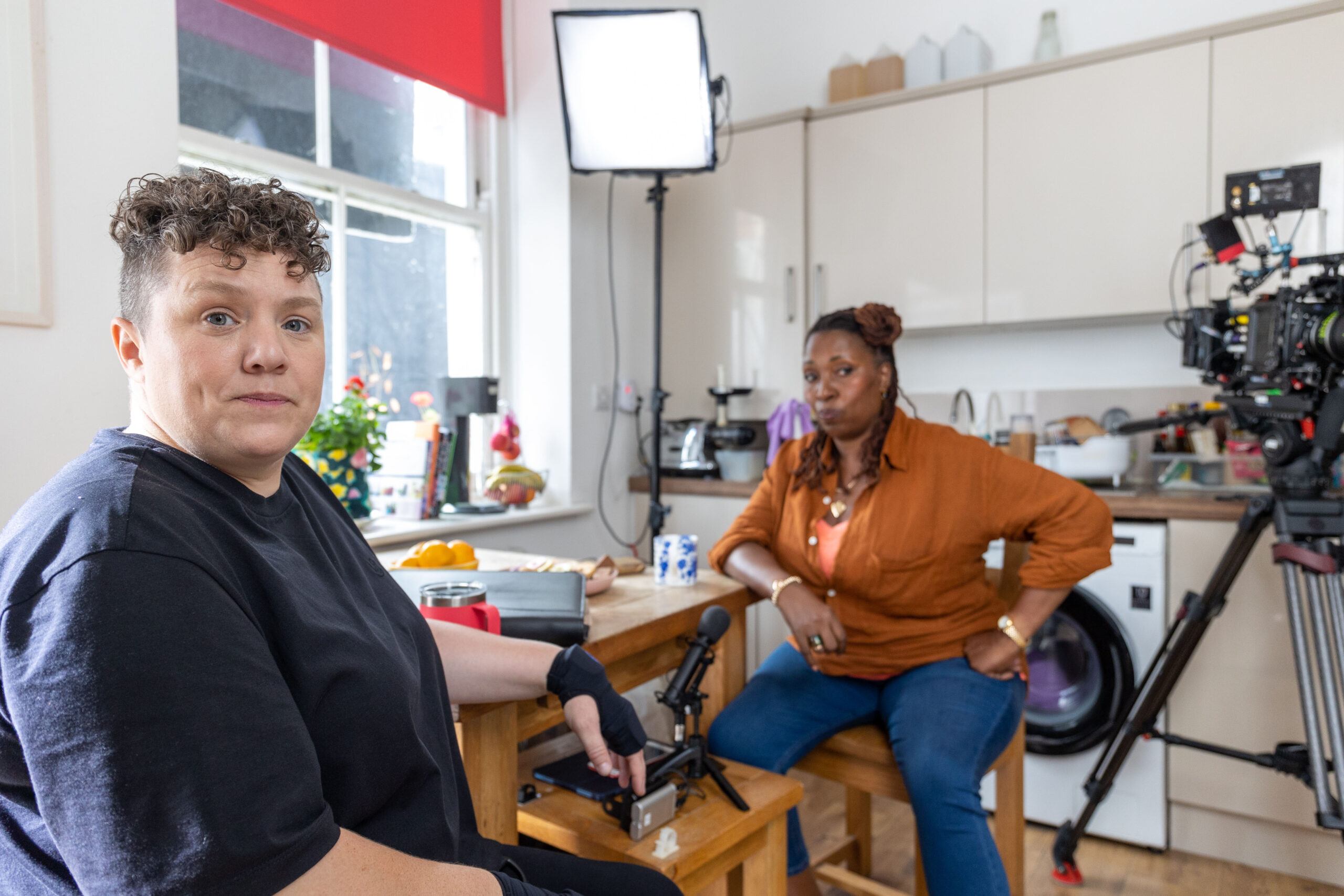 When I was thinking about the story I wanted to tell, it felt important to put social care at the centre. Not the crisis-ridden version you hear about on the news though, what I wanted to show is the social care I know, the skilled support, friendship, messy moments and relentless bureaucracy that keeps me alive.

While it’s fictional, Biscuitland draws closely on my life and experiences. I play myself, and it was a very different type of performance than anything I’ve done before. It’s been a steep learning curve! I was generously and brilliantly supported by the rest of the cast who each bring their characters to life in gorgeous, funny and nuanced ways.

It was important to explore how access provisions and elements of Disability Culture could be creatively incorporated. For example, you might notice that the characters describe what they look like, and we’ve made a Visual Story which you can download here. This document uses words and pictures to introduce the characters, describe the story, and explain what to expect from the show.

Developing Biscuitland has been fascinating and it wouldn’t have been possible without the strong and trusting relationship we’ve built over six years with our producer and director Jon Rolph. Jon not only helped us understand and navigate the process, but crucially he wasn’t afraid to do things in new ways so that they worked for my body and brain. You can listen to ‘Talking The Biscuit’ below. In this recording Jon and I talk about what we learned from making Biscuitland together. There’s also a transcript of it here.

Just like in most industries, the barriers disabled people experience within the world of TV are numerous, interconnected and often invisible to those without the lived experience. In fact, many of the barriers were invisible to me until we got started. Some you might expect, like the challenge of finding wheelchair accessible locations, or creating a schedule that was manageable for my fluctuating pain and energy levels. Some are more hidden, such as the extra time it takes to bring each new team member up to speed with our approach. 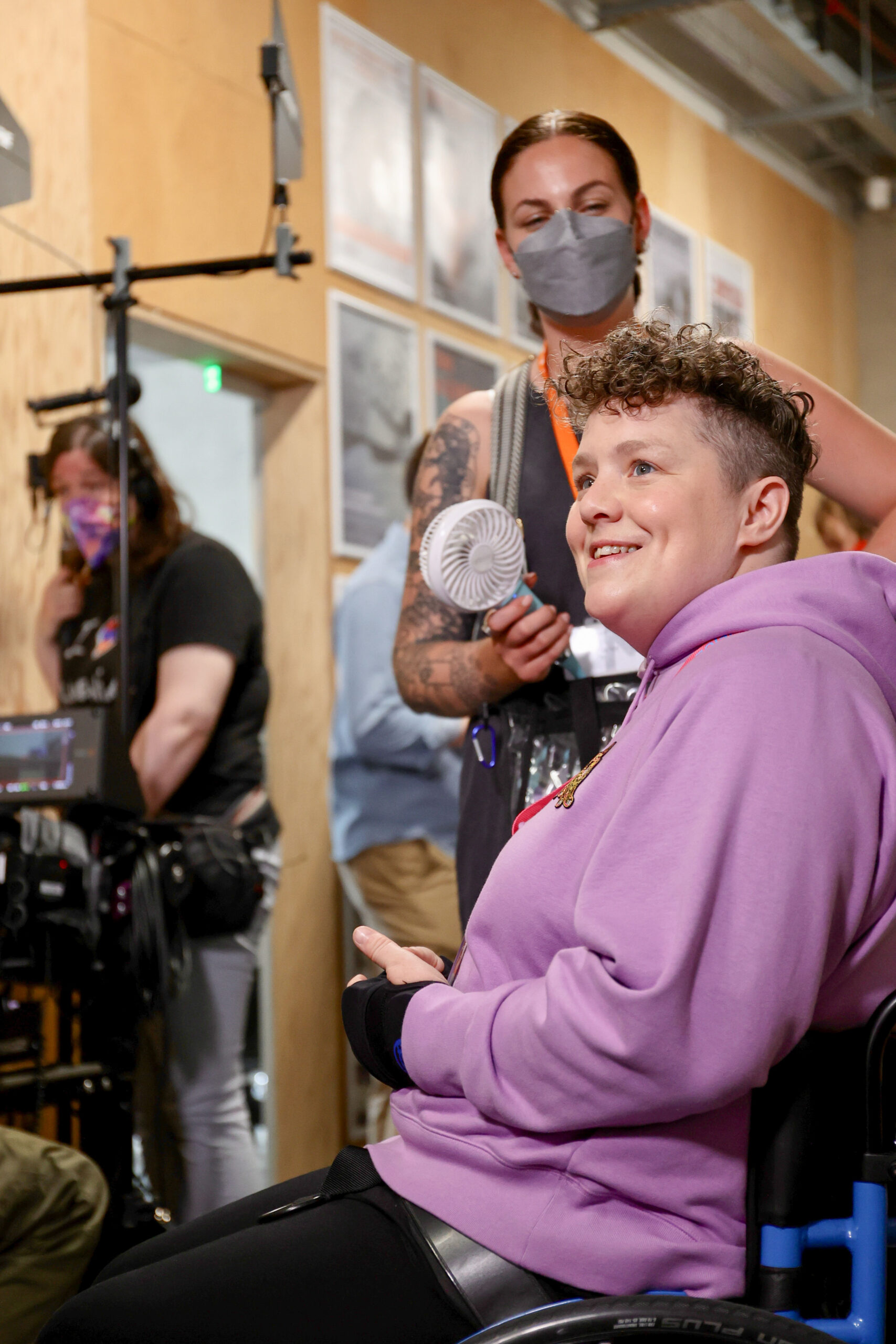 While the journey to Biscuitland has been longer and more complicated than it would have been for my non-disabled peers, it also meant we had time to build the trusting relationships necessary to take creative risks. Trust is particularly important to me as someone with Tourettes, because tics can be very suggestible and if I’m not comfortable with someone I’m neurologically incapable of keeping it to myself. Making space for my tics, and the spontaneous creativity they give me was one of the most interesting parts of the experience for me.

I’m so close to Biscuitland and the challenges of navigating social care systems that it’s hard for me to guess how other people will respond to this pilot. While we were making it, I saw an email from our line producer (who deals with logistics) explaining the piece to someone else. He said it followed ‘a stressful day’ in my life. This made me laugh because I hadn’t thought of it that way at all. To me, this was just another day!

I don’t know what’s next for Biscuitland. I’d certainly love to spend more time exploring it and thinking about the characters and stories to come. What I do know is that Biscuitland has been made with love and care for the communities I’m part of. I really hope you enjoy it, and please share Biscuitland with as many people as possible.