Shortly after I woke this morning Joyce and Bovie came into my room singing Happy Birthday… It was definitely one of the nicest ways to wake up – ever!

They were soon followed in by another great double act by Innes and Lily who made me a delicious birthday breakfast. We then tested out my new inflatable hot tub.

Before long Erik arrived. He often works as the Touretteshero production manager, and we joked that he was going to production-manage my birthday. And that’s exactly what he did, brilliantly. He kicked things off by making a to-do list… 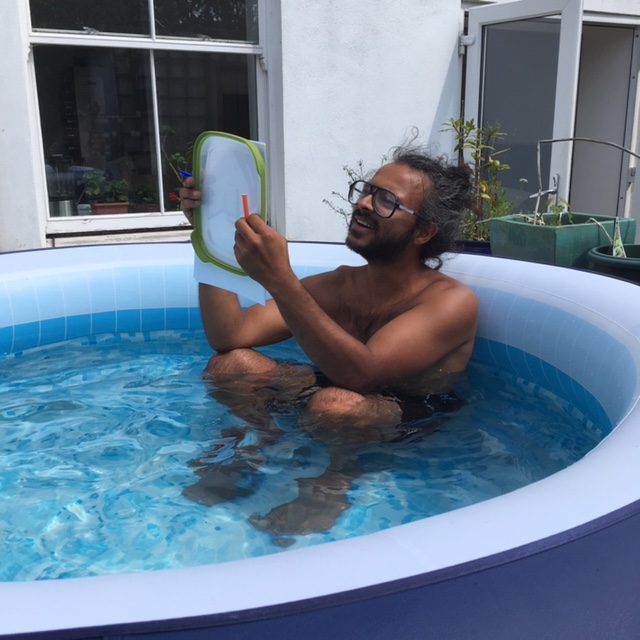 …in the hot tub. Maybe this will become the new way we conduct business.

Erik and I jumped in the Touretteshero van and sped off towards Stockwell where Oasis Play, the children’s play organisation I used to work for, were having an amazing inclusive summer party.

Once there I got to check out their new play structure – it’s huge, colourful, inventive, challenging, high and fully accessible! Monkey Do, the company who made it, have done an incredible job. There are so many things to chose from: you can chill out in the nets, operate the pulleys, or play with the many multi-sensory panels. This was one of the last projects I fundraised for before I left Oasis in 2016 and I felt proud to have played even a small role in making sure there are more adventurous accessible places for everyone to enjoy. 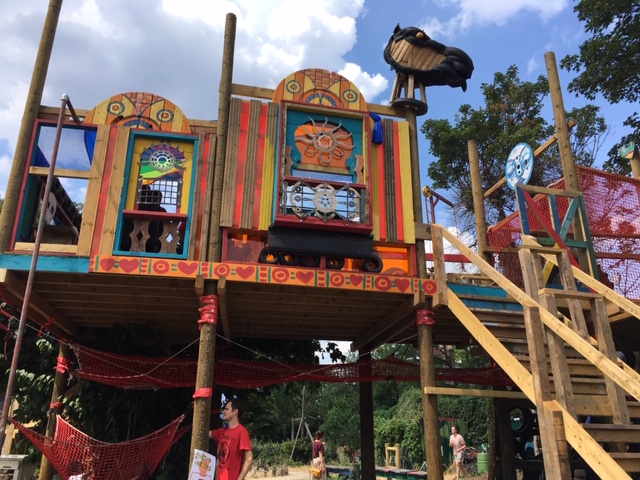 After Oasis and a quick whizz round a supermarket, we headed back to the castle where I power-napped, and Erik set up my garden with mats and beanbags.

Fat Sister & King Russell were having their annual summer barbecue which was a perfect first part to my celebrations. Joyce had seasoned the meat for King Russell to cook, and along with contributions from lots of other people there was a feast. It was my niece Squidge’s first big party and I loved watching her careering about on the trike I got her for her first birthday a few months ago.

As we headed into the evening I went back to the castle, where the hot tub was waiting, for more birthday fun. The children jumped straight in and I followed quite soon. I loved playing in there with them and the playworker in me kicked in immediately and we played a game of Ocean Scatter. Water play is always my favourite.

The kids headed home but most of the mums stayed, along with a handful of other close friends. After a quick water re-fresh, a more grown-up and marginally more serene crew started enjoying the pool. 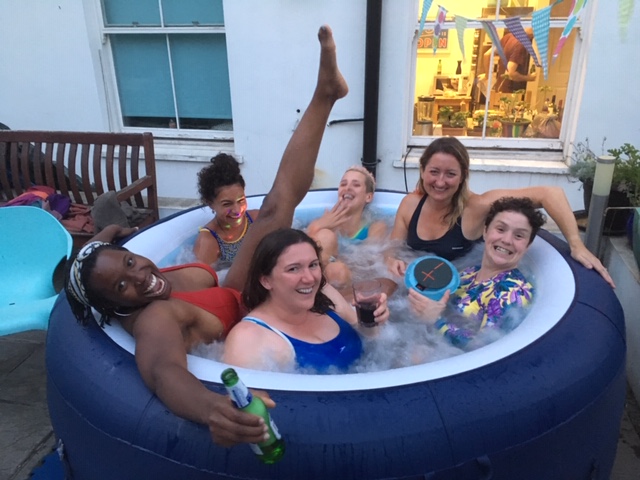 You might notice the floating light – there’s also a floating speaker pumping out music, a gift from Fat Sister and King Russell.

While we were in the tub Ruth told us about how her niece Shania was doing. She’s sixteen and has just finished her GCSEs, so she has a summer of freedom and relaxation ahead. Ruth told us that Shania kept saying she was ‘living her best life’. We all liked this phrase and later when I went to bed I found this reminder on my pillow – a piece of toilet paper with ‘Living Your Best Birthday’ written on it.

The last few months have been quite tricky for me. I’ve not had the energy to do a lot of things that I love and I’ve also not been able to see many of my friends as much as I’d like to.

The idea of ‘living your best life’ and focusing on whatever is happening right now feels really useful to me.