Joyce was supporting me today and we got chatting about theatre. She’s not a regular-theatre goer but she did come to the Brewing In The Basement cabaret night we held at The Barbican Centre last November.

Joyce, who’s Jamaican, said she was keen to go to the theatre again, and I remembered there’s a new show at the National Theatre about the Jamaican tradition of Nine Night. Joyce was up for seeing it with me so I set about booking tickets for the two of us and one for another support worker because I wanted Joyce to enjoy the show as my friend rather than as my carer.

The process of booking’s been incredibly long so far. I wasn’t able to do it online in the same way that non-disabled people can. Instead I had to call the box office to find out if there were any relaxed performances of the show. I was told there weren’t and the person on the end of the line told me that, “relaxed performances are only for family shows”. This instantly made me angry and sad. What he said is a common myth, but it’s also ridiculous – what’s the point of fostering a love of theatre in disabled children if there aren’t any shows they can access easily when they get older?

I wanted to book three tickets together so Joyce and I could sit next to each other with my support worker there as well. I was told this was not possible as only one companion ticket had been held back next to the wheelchair space.

I booked the tickets anyway, and followed up with an email to the access team about my concerns. I also asked for three reasonable adjustments to be made when we attend the show in the same way as I do when I go to see any show that isn’t a relaxed performance. So far the booking process has taken an hour and it’s not over yet.

I’ve been advocating strongly for relaxed performances for the last four years. I’ve delivered training to many venues and theatre companies and for a while I felt optimistic that the momentum around access was growing. But the pace of change is shatteringly slow and there’s no reason for it to be like this. 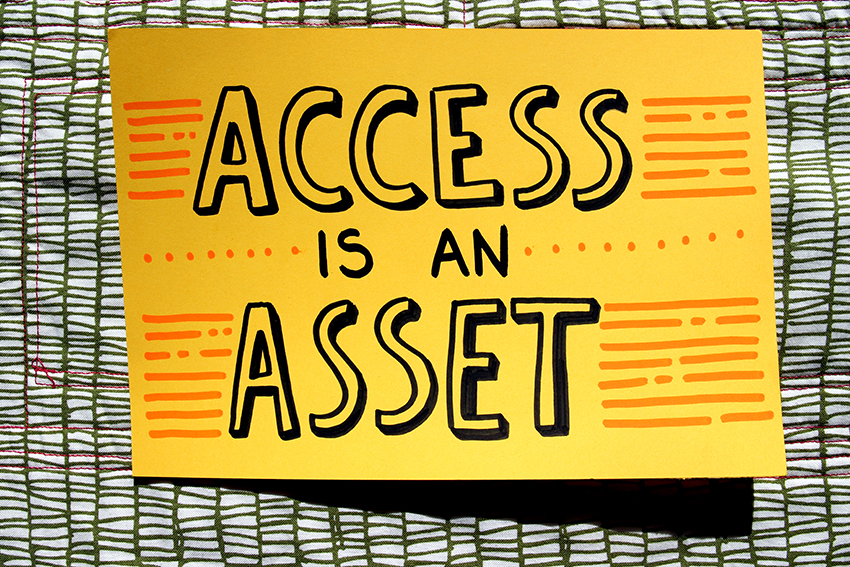 I decided to look at ten of the big London theatres to see what relaxed performances they had coming up. Eight of them had nothing at all and of the two that did they had just one or two shows several months apart.

It seems weird to praise the Royal Court for holding just two relaxed performances in a programme of around 377 performances, but their rate of 0.5% was the best offer made by any of the ten venues I looked at!

Most of these venues had carefully-worded information about relaxed performances in their access sections – they just weren’t offering any.

Eight out of the ten are Arts Council England National Portfolio organisations, and in just one year (2018-19) they will receive £65,488,614 in public money. Are three relaxed performances between them really all they can manage?

Anyone who thinks, ‘That’s all very well but surely it’s quite a niche requirement?’ is wrong. 22% of the UK population identify as disabled and while of course not all 14 million of us will have relaxed performance as an access requirement, a good proportion will. In fact if you add up the number of people in the UK with one or more of five of the impairments that might make relaxed shows useful, you get to almost 9 million people.

I selected these ten venues because of their scale and because they are representative of the wider sector but they’re far from unique.

I’m tired of saying the same thing, making the same points, speaking at conferences, drawing attention to barriers and how they can be dismantled, only for the situation to remain largely unchanged.

Of course there are some venues making concerted efforts to change. The Albany in Deptford is central to the local community and is home to the amazing Heart N Soul who promote learning disability culture. We’re working closely with Battersea Arts Centre to help them become a Relaxed Venue where assumptions about audience behaviour are inverted and all shows are relaxed unless there’s a clear creative rationale for why not.

With all my heart and as much politeness as I can muster, please can we stop talking about relaxed performances and start putting them on?