My body was heavy with tiredness when I woke this morning after an intense week in Edinburgh for the Fringe. It was nice to wake up in my own bed though, and to see Joyce, who helped me get washed and ready for the day.

What better way to settle back into London than to head out for a dance at Notting Hill Carnival!

Leftwing Idiot arrived and we went out into the sunshine. We’ve got a tried and tested approach to Carnival. We start out on a bus to Paddington, then go along the canal footpath until we feel the rumble of the bass, and when the smell of jerk pans is tantalisingly close we duck into the thick of it through Meanwhile Gardens, and head straight to the Aba Shanti sound system nearby. We stay and dance until we ache and then speed back out along the canal.

We rived early and danced solidly for several hours. The sun was out, the speakers were stacked, the tunes solid, and the bass reverberating through my body gave me, as it always does, massive relief. 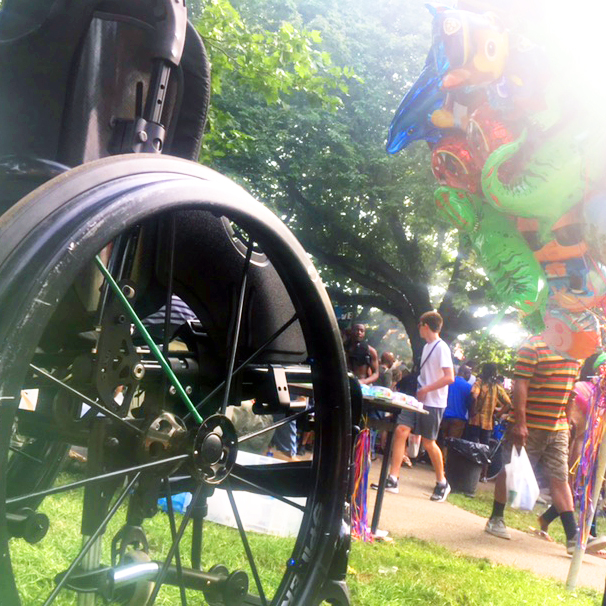 I love dancing to, and absorbing deep loud bass because it somehow soothes the uncomfortable sensations in my body. Having Tourettes means my need to move is irrepressible and constant – I often describe my tics as a strong sensation that feels like itching powder in your blood. Being able to move with purpose, get lost in rhythms, and have the buzz of my brain replaced by the buzz of the music, gives me an incredible feeling of release.

At 3pm Carnival fell silent in solidarity with the people of Grenfell Tower, many of whom lost their lives and their homes in the horrific fire back in June.

Just before the minute’s silence began a woman standing nearby, who seemed quite drunk, grabbed me suddenly, shouting at me to be quiet. My heart instantly filled with shame and my eyes with tears. But just as instantaneously I felt Fran and Leftwing Idiot’s arms around me, and also those of a stranger standing nearby. I felt held not just physically, but also enveloped by the support and energy created by the sound system team. The woman backed away and the minute of commemoration and reflection began.

While I might not have been completely silent, the families of Grenfell were at the forefront of my mind. One of the mics nearby picked up the rhythmic noise of my tics and they echoed quietly out through the speakers. Far from feeling worried by this I felt a strong sense of support and understanding.

It felt essential that the residents of Grenfell Tower, which sits on the Carnival route, should be remembered at this incredible celebration of community. Carnival demonstrates the power of people working together, and at a time of increasing injustice and inequality this is more essential than ever.

Sadly this isn’t the first community commemoration for a tragic, preventable loss of life in a fire in a block of flats that I’ve been part of. Eight years ago I watched in helpless horror as flames ravaged Lakanal House, very near to where I live.

I hope with all my heart that communities never again have to stand in silence and remember people whose deaths could have been prevented.

After the tribute to Grenfell the sound system roared back into action and the throng of people started moving passionately and rhythmically together once again.

My thanks to everyone at Aba Shanti, to everyone who made space for me to get through, and to Leftwing Idiot for pushing me about on such a hot day.

When I woke this morning I was heavy with tiredness – now my tiredness has a different tone – the ache of dancing limbs, the essence of bass in my body, and the joy of reconnecting with my home city.