In all this time I can’t recall a single occasion when I’ve rolled through dog poo – until this week, when it’s happened twice!

The first time was on the way to work. I was navigating the busy streets of Peckham with my amazing new power wheel when I sped through some poo without noticing – at least not straightaway. I got to work, took off the power wheel and my jumper, and ran a hand through my hair. That’s when I noticed the stink.

I looked down to see my hand was covered in poo. My PA Claire and colleague Trina were quick to hold me steady before my oppositional tics had a chance to make matters much worse. They cleaned me off, but the smell in my hair remained. Thankfully, we have a wheelchair accessible shower at work so Claire and I headed there for a proper wash, while Trina sorted me out with fresh clothes.

Shower seats and grab rails aren’t always installed correctly so I usually check them before using them, but in the rush to get clean I didn’t think to, something I instantly regretted. As soon as my bum touched the hard plastic seat the tile it was attached to cracked loudly and I was deposited abruptly on the floor. Claire and I laughed with a mix of shock and disbelief. I declared myself unhurt but twenty minutes later it was clear that the fall had sent my pain levels rocketing through my body and the rest of the day was pretty much a write-off.

The second run-in with canine poop was yesterday on the way home from collecting my niece from school. I hadn’t strayed off the pavement at any point, but I still ended up with poo on my wheels and then on my hand. This time we caught it before it got into my hair which was small comfort, particularly as this poo had a less than healthy orange hue. Thankfully we had disinfectant wipes in my emergency bag so after a quick wipe down we were on our way again.

My niece Bean, who’s outraged by anything non- accessible, had a lot to say about people who let their dogs poo on the ground and don’t clean it up. She immediately understood something that many adults seem to overlook – getting poo on your wheels isn’t the same as getting it on your feet.

Yes, if you step in poo, it’s not very nice – it smells and has the potential to get on your carpet. If you roll through poo the same thing’s likely to happen, but whatever gets on your wheels also goes on your hands! And what goes on your hands can quickly end up in lots of other places you wouldn’t want poo – especially if your arms move around uncontrollably.

It’s fair to say that dog poo hands and Tourettes is a particularly intense experience, but the bigger and more serious issue was how these encounters disrupted my plans and wellbeing for the rest of each day. Because my energy levels are so precarious, and they’ve been particularly so over the last few weeks, everything I do is carefully paced and balanced. I often have to choose whether I use my energy to have a shower or answer emails, play with my niece or phone a friend. If I have to do loads of extra washing of myself and my chair, this energy is taken away from whatever else I had planned. I have no spare energy, so I can’t just push through. One abandoned dog turd can stop my day in its tracks. 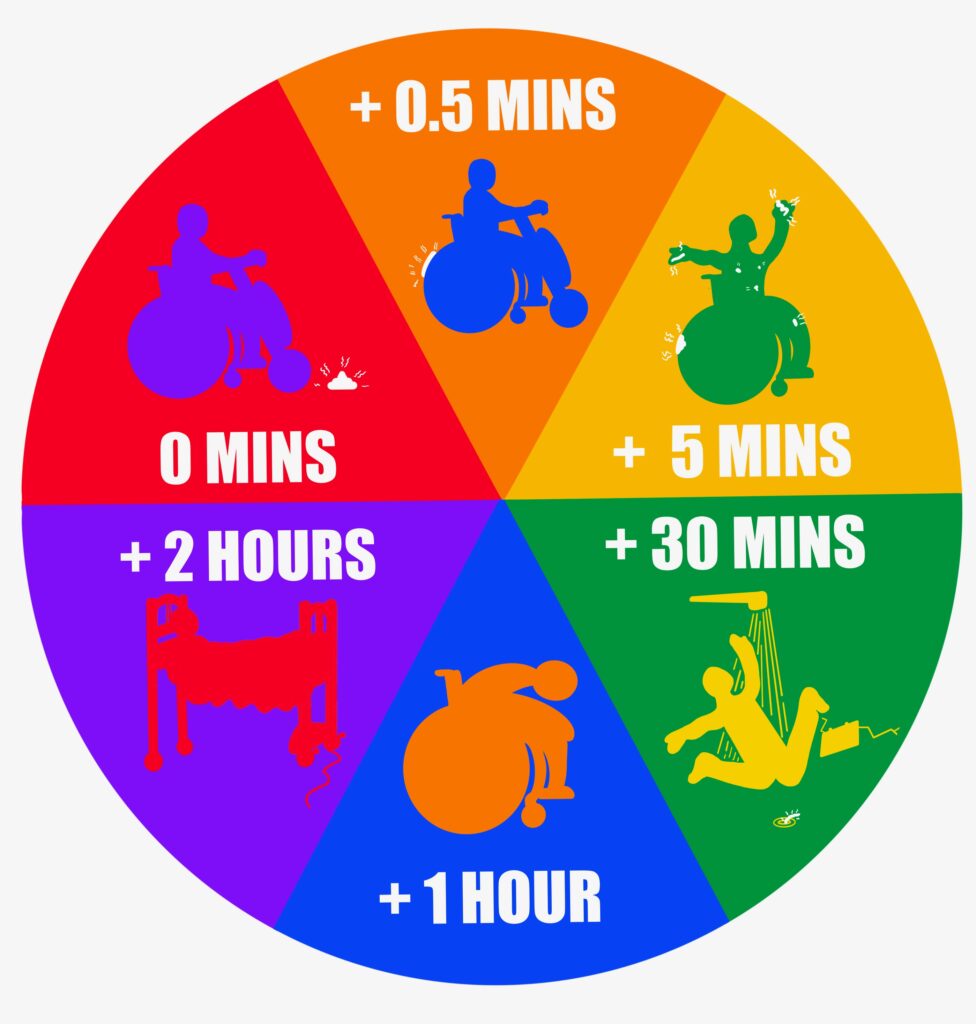 I was intrigued as to why this had happened twice in such a short space of time after years of being faeces-free. The first one felt like a one off, but when it happened again it got me wondering what’s changed. I reckon the options are:

1) There are more dogs, or dogs are pooing more, or dog owners are cleaning it up less or a mix of all of these
2) The pavements are getting cleaned less often and so abandoned poo stays on the ground for longer
3) My new power wheel means I’m less worried about hitting bumps and cracks so I’m less focused on the floor and therefore not as likely to spot turds on the horizon
4) Or there’s Leftwing Idiot’s explanation which is that the power wheel means he and my PAs are pushing me less so I’m responsible for my own journeys

Whatever the reason, two days this week have been stained by poo.

If you have a dog, please take a moment to stop and clear up after it so that I and other wheelchair users don’t lose hours or days because of poorly placed poo.