It’s almost exactly ten years since I started using a wheelchair – tics in my legs had caused repeated injuries and moving around had become increasingly fraught.

But the decision to start one was made harder by the negative ways that wheelchairs are often seen in our society. My anxieties were less about moving around on wheels and more about how other people would respond to me. These fears evaporated the instant I sat in my first chair – it was clear to me how much safer and more in control it made me.

I’ve written a lot about my love of wheelchairs since then, including this extensive guide for new wheelchair users. Finding the right chair is an iterative process and with every upgrade I’ve got closer to my ideal set up.

When I got my current made to measure chair in October 2019 I said:

“…it was as if I’d been able to buy a new body. And not just any old body – it’s like the difference between being able to jog around the park for ten minutes panting, and being a gymnast.”

I love this chair deeply but there was still one thing I longed for – to be able to move along next to my support workers rather than being pushed by them.

There’d been a brief period where I’d had a light enough chair and sufficient energy to push myself outdoors, but since my pain intensified and my energy decreased I’ve not been able to do this at all.

The only way I could get significantly more freedom was by using power, either a powered wheelchair or a power add-on like power wheels. I’ve tried all sorts of options, but nothing worked for me or felt safe.

Nothing had worked because tics in my arms mean I can’t reliably keep my hand on a button. Most power chairs stop as soon as you take your hand off the power, so for me, using a power chair is anything but a smooth ride.

None of them felt safe because I have oppositional impulses – which involve doing the worst thing in any given situation. This presents some issues even in my manual chair, but with added power it becomes even more dangerous.

I’d pretty much given up on finding a power option that worked for me, but I’ve always kept an eye on what’s available and recently I came across something that I thought had potential. 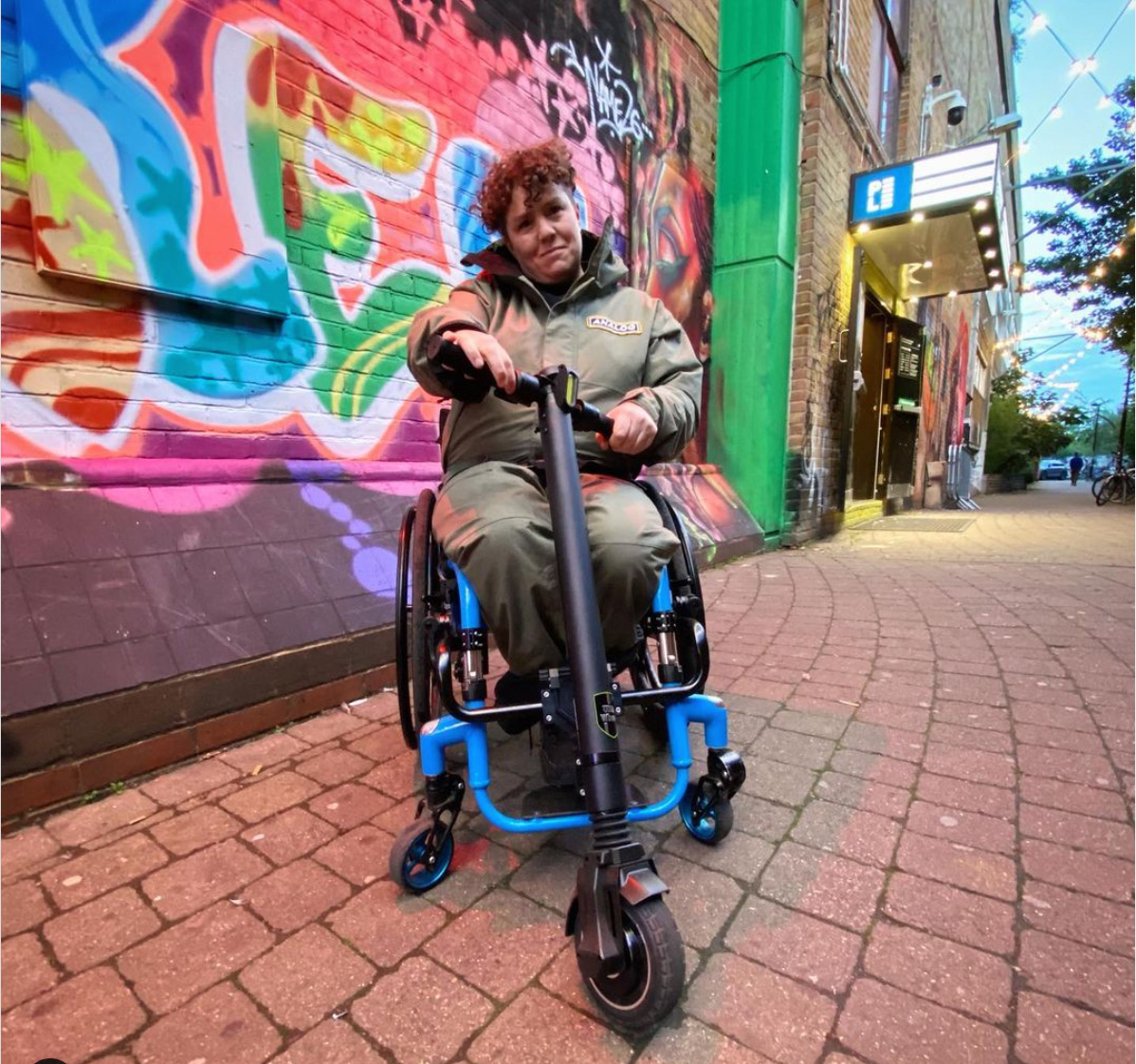 It’s called a Una Wheel Mini and it’s basically an electric unicycle. I can attach it to the front of my manual wheelchair, instantly transforming it into a power trike.

I thought this might just work for me because the Wheel can be put on and taken off really easily, which means that I’d have more choice about where and when I’m using it. And that would mean I could take control in a safer environments like a park, but return to being pushed if I’m near a main road.

I tried one out on Monday and knew instantly it was going to be a game-changer. It’s not as powerful or sensitive as some other add-ons, but that’s exactly what I need! It also has a setting which limits the speed to the equivalent of a brisk walk. I was lucky to get one of the last wheels in the UK, the suppliers were great and fitted it then and there so I came home with an incredible new addition to my kit.

Over the last two days I’ve been using it everywhere and making up errands I need to run just as an excuse to get out and about.

I didn’t know how desperately I wanted to move around more independently until I started using the Una Wheel – it’s made me very happy!