I’ve just got back from performing at the Brilliant Shambala Festival. Shambala’s got a very special place in my heart for several reasons – it’s the first place where I ever went on stage. It’s where I learnt the value of sharing my tics and experiences with other people, and it’s where I first felt the immense power of shared laughter.

This year I didn’t perform with Captain Hotknives or do my stand up show – instead I gave a talk. The tent was packed and the audience was responsive and incredibly warm, literally! It’s been one of the hottest bank holiday weekends on record. 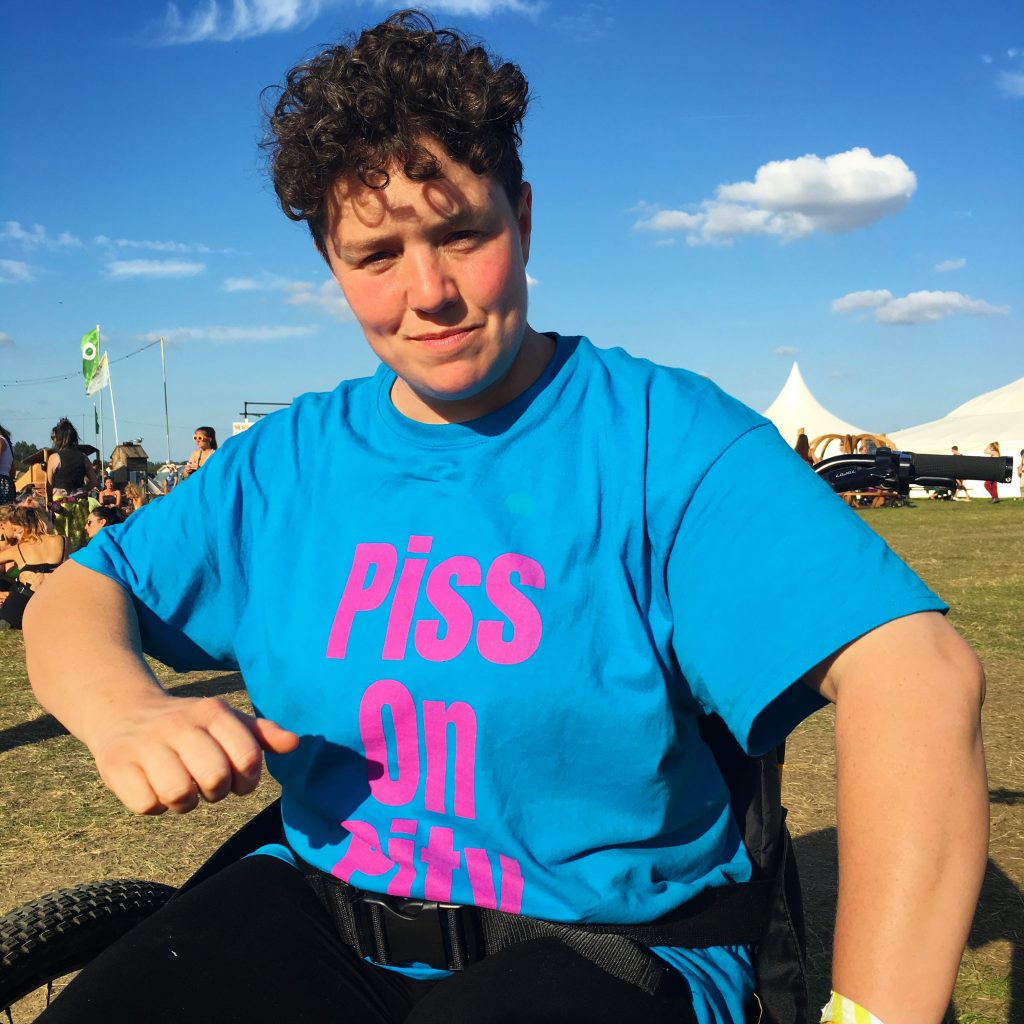 My talk explored how laughter and creativity can be used to deepen our understanding of each other and catalyse much-needed social change. It was funny ending the week talking about laughter and disability because that’s how it’d begun too.

On Monday Dave announced the winner of their annual competition to find the best joke of the Edinburgh Fringe. An ‘expert’ panel selected a shortlist and then the great British public voted for their favourite. The winning joke was a pun about Tourettes from the comedian Olaf Falafel. Here it is:

“I keep randomly shouting out ‘Broccoli’ and ‘Cauliflower’ – I think I might have florets.”

Before I go any further, I want to get a few things straight:

• I’m not personally offended by this joke
• I’m not calling for an apology (Although Tourettes Action are)
• I have no issue with Olaf
• This is definitely not the worst Tourettes joke I’ve ever heard – it’s not even the worst I’ve heard this week!
• I don’t think there are subjects that should be off-limits for comedy if they’re handled appropriately
• I’m not the laughter police

These caveats are necessary because it’s very easy to dismiss anyone raising concerns about a joke with comments like: ‘It’s just a joke’, ‘Stop taking yourself so seriously’, ‘It’s political correctness gone mad’

One Twitter user took this type of dismissal a step further by saying: ‘You DO NOT have the right to be offended… you moronic fucking Tourettes cretins.’

Like @BlokeWorking many other people fiercely defended Olaf’s right to tell his joke while simultaneously telling anyone who objected to it that they weren’t entitled to an opinion.

Here are my issues about this joke winning Dave’s award:

1. It’s Not The Joke, It’s The Platform – This joke was a fleeting moment in one of thousands of Edinburgh shows – without this award and the associated media attention it would’ve had very limited reach, and any negative impact would’ve been small. I don’t care that the joke exists but I am concerned that a panel of ‘experts’ selected it for the shortlist. By amplifying the joke in this way they’ve also amplified the harm it does.

2. Where The Laughter Sits – I started Touretteshero to celebrate the humour of the condition and to reclaim the laughter associated with it. Most people understand that there’s a difference between laughing at someone or with them. Where laughter sits matters. Shared humour is an essential part of my life and it’s made some difficult situations easier to manage. I’ve also felt the crushing weight of laughter when it’s been dumped on me. The laugh in Olaf’s joke doesn’t sit right. It relies on the cliché that having Tourettes is just about shouting random words, which appears to be endlessly amusing to people who have no first hand experience of the condition.

3. Access To Comedy and Culture – People with Tourettes can only share in the laughter if we can get into the room and stay there. Olaf’s show was in a non-wheelchair-accessible venue, which means that I, and many other people whose mobility is affected by Tourettes, wouldn’t have been able to get in. He didn’t offer any Relaxed Performances either – these are shows that take a relaxed approach to noise and movement from the audience, allowing people with conditions like Tourettes to enjoy live performance without fear of being asked to leave. I’ve written about some of my experiences accessing comedy here. Across the whole Fringe programme only 2% of shows were relaxed. Joking about disability without understanding or addressing disabling barriers in this context is just weak. Are stand up shows intended to be safe spaces for non-disabled people to laugh at disabled people who can’t even get in the room?

4. The Cumulative Impact – Olaf’s joke is far from unique – time again Tourettes crops up as the punch line in jokes. Celebrities like Jonathan Ross, Jimmy Carr and Ricky Gervais have all made one-dimensional Tourettes jokes. Former Prime Minister and Brexit architect David Cameron used Tourettes to insult Ed Balls at the same time as he was stripping away support from disabled people. Even sitcoms like Episodes and Outnumbered have got in on the act.

These jokes have a cumulative impact on the Tourettes community. Olaf’s joke has caused real distress to some people with Tourettes and their families. These misrepresentations matter because they can get in the way of people getting the support and understanding they need. I’ve heard countless people describe how friends, teachers or colleagues have said, “You can’t have Tourettes, I’ve never heard you shout or swear”.

It’s not people like me who’ve had Tourettes for a long time and are accepting of their tics who’ll be most affected by this – it’s the children being diagnosed this week, the bullied teens going back to school or the adults battling through bureaucracy for basic support. Some people with Tourettes won’t mind this joke, while others will be deeply hurt by it.

Some comedy shows have addressed Tourettes quite well – for example there’s an episode of South Park in which Cartman pretends to have Tourettes so he can get away with swearing, but this backfires when he starts shouting out personal secrets. This episode was well researched and in my view the laugh was on Cartman for faking it, rather than on Tourettes itself.

Olaf had every right to tell that joke. But I’m well within my rights to explain why I think it’s unhelpful. Writer Will Self gave his opinion in slightly starker terms in The Observer last weekend:

“Frankly, if I’d been on hand to heckle when Falafel threw up this little ball of wit, I’d have shouted “Fuck you, you fucking shitting wanking fuck, you’re about as funny as fucking fuck-all – what makes people with Tourette’s ripe for your alleged ‘humour’? Are there other disabled folk you’d like to have a go at while you’re up there?” Thereby exhibiting the rank hypocrisy of those of us who aren’t so much woke as utterly insomniac.”

I’m not interested in taking away a comic’s freedom to tell jokes about tricky subjects but I do think comedians have a responsibility to make sure they’re not telling jokes that punch down, or using their privilege to oppress others. What I’m certain about is that people without tics don’t have any right to tell people with Tourettes how we should feel.

Until you’ve been to the funeral of a teenager with Tourettes who’s taken their own life, or been asked to leave every comedy gig you’ve ever been to because of the involuntary noises you’re making, or sat on a train and watched as one by one people have moved away from you – perhaps you might not understand why people like me might not find a joke about my impairment funny. If comedy helps us learn about awkward subjects then it’s useful to listen to the people who those jokes are about as well as the straight, white, non-disabled men who make them.

To Dave, I’d love you to make the following commitments:

1. Ensure that future selection panels are diverse and include disabled people (despite what Twitter might think we do have a sense of humour too!)
2. Tempting as it obviously is, avoid celebrating jokes that reinforce stereotypes of marginalised groups
3. Think about ways you can showcase and support Disability Culture more effectively on your channel

1. Expect a diverse audience and think about how you can make sure everyone’s able to enjoy your work – this could include holding Relaxed Performances, working with sign language interpreters, providing information in advance about what to expect, or having funny and original material
2. Think carefully before making jokes about conditions of which you have no lived experience, seek out and listen to the views of people who may have more insight than you

If you want to learn more about the aspects of Tourettes that have made me laugh, there are 318 posts for you to explore just here.

One response to Punch Line Punch Down Punch Up