I feel really sad.
A deep churning sadness.
A very familiar and crushing mix of shame, frustration and exhaustion.

It’s a mix of feelings I can’t remember ever not being present. Experience tells me these feelings won’t last with the intensity I’m feeling them right now, but neither will they ever fully go away.

I’m mostly very happy, but there’s an aspect of myself that I’ve always found hard: hard to experience, hard to think about and hard to explain to others.

This blog has always been about honesty, openness and not shying away from the difficult bits of my life with Tourettes. So I’m going to trust in this and make myself write about something I find very challenging – my challenging behaviour.

I can’t remember a time when my behaviour wasn’t seen as a problem to other people. This doesn’t mean all the time, and most of the time I’m usually thoughtful, kind, calm and compassionate. But sometimes I’m very suddenly not. Sudden changes are usually caused by predictable triggers: tiredness, work pressure, and the usual minor frustrations of life: anything from the printer not working or running late can cause me to overreact.

A school report from when I was six said: “She is generally speaking quite a well-behaved child and yet, when she is feeling frustrated or ‘got at’ by her peers, she can become quite aggressive, e.g. pinching, pushing.” This was just the tip of the iceberg – at home I’d get really overwhelmed and have dramatic meltdowns that my parents described as tantrums. This is a star chart my dad made when I was ten: 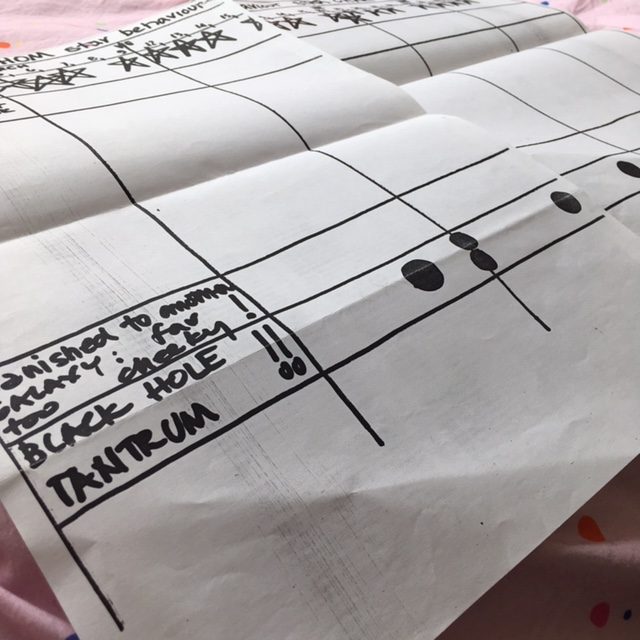 I recently read this great article on the difference between tantrums and meltdowns. While they might superficially look the same they happen for very different reasons and so require different responses. In short, a tantrum happens because someone wants or needs a particular thing, and usually stops when that need or want is met. A meltdown is a response to feeling overwhelmed and is similar to a fight or flight response.

I often feel a challenging situation starting to escalate and despite desperately wanting it to stop I’m rarely able to assert that type of control. This feeling has been pretty much the same my whole life and is no different now from when I was six. 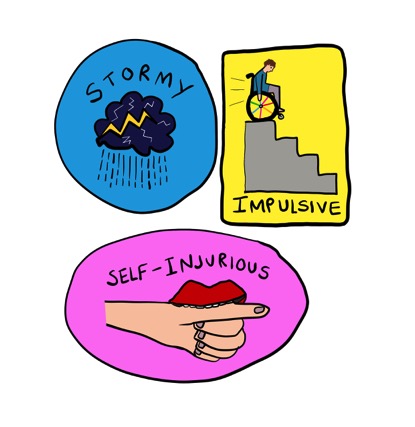 1) Stormy thinking – this often happens prior to a ‘ticcing fit’ or when I’m really tired. I may get agitated by something small that wouldn’t usually bother me. During these times I find it hard to move on and can feel myself sliding into cyclical thinking. I imagine that to other people this feels as if I’m picking a fight or deliberately winding myself up. The reality couldn’t be further from the truth – I often feel myself behaving in a way I really don’t want to, but I’m rarely able to get myself back on track.

2) Impulsive tics – for some people with Tourettes (including me) tics can be oppositional and there’s an element of doing or saying the worst thing in any situation. For example, if I see a hot ring on a hob I know it’s hot, and therefore that it should be avoided, but the oppositional and impulsive part of my brain makes me reach out to touch it. Similarly, if I’m tired I find it hard to stop and rest, or after an argument has been resolved I might then tic something really provocative. It doesn’t matter how much I understand this to be involuntary, I always feel upset with myself and feel that I should have tried harder to assert control. And because I feel like this I tend to assume others must make the same judgements too.

3) Self-injurious tics – these can include hitting or biting myself and often the tics occur in response to sensory or mental overload. This doesn’t happen just with negative situations – being really over-excited or happy can also trigger them. I might hit myself or lash out at things or people around me. This type of behaviour often requires physical intervention to keep me safe but I can find this hard to accept and often shout ‘Let go!’ even though intellectually I know I need the support.

This is on my mind because last week while we were in Switzerland, Leftwing Idiot and I had a conversation in which it came up. He’s been away for a month, so hasn’t had to deal with these types of situations for a little while. I know that my volatility is something he finds hard, especially at times when his energy reserves are low.

Our conversation wasn’t one born of anger or one with any sense of blame. He explained honestly and simply that his own resilience is low at the moment so he’s finding these challenges even trickier to deal with and be around. I totally understood and appreciated everything he said but it also felt breathtakingly sad.

It felt like being told someone I care about deeply was allergic to me.

It’s not defeatist to say that my behaviour isn’t going to change. There are obviously some factors that I can control that make challenging situations less likely – getting enough sleep, allowing enough time to move between activities and things like that. But after almost four decades living with this body and mind I’m realistic about what aspects of my behaviour I can change.

This post isn’t full of answers. These are complicated issues and I’m not going to iron them out in a few paragraphs, but it does feel like a big first step to being more open about this aspect of my life.

I already feel a slight lightening of my heart – I feel more at peace with myself now I’m coming to the end of this post than I did when I started writing it.

I’ve been thinking about the conversation with Leftwing Idiot a lot over the last week, and I hope that we have more conversations about this subject. I very much hope that through discussion and negotiation we can find better ways to manage my challenging behaviours so that they have the minimum impact on our wellbeing and on our friendship.

I’ve spent a long time in the shadow of my ‘black hole’ behaviours and I worry that the person I want to be and feel that I am most of the time gets lost. This is a first attempt at reclaiming myself.

2 responses to Challenging Myself