Here at Touretteshero we have what we call the ‘Ideas Shelf’. It’s an imaginary shelf and we put ideas for future projects, events or services on it. These ideas are then ready to be taken off the shelf when the right opportunity, partner or funder comes along.

I’ve mentioned in previous posts that last week was tricky both physically and emotionally, and that I’d had some difficult conversations. In the course of all this I noticed that there are some words that I’m particularly sensitive to. These aren’t rude or offensive words, in fact they’re totally ordinary, and most people wouldn’t think twice about using them. But for me they have upsetting connotations.

They’re words that instantly unlock feelings and ideas that I find hard to think about. It’s as if they’re a shortcut to experiences sitting on a shelf and waiting for me to reach for them. It’s a bit like our Ideas Shelf but more painful, so perhaps it should be called my Agony Shelf. 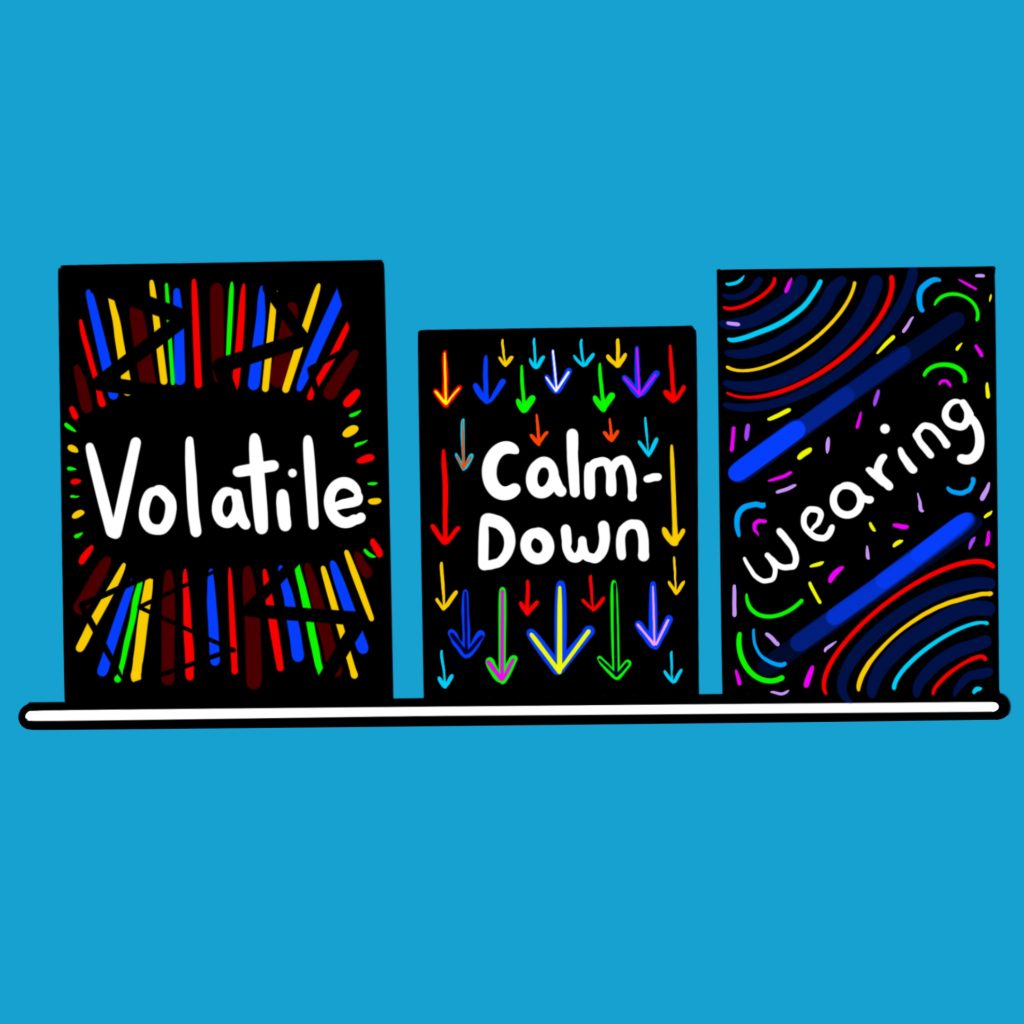 Here are some of these words and reasons why I find them so challenging:

Volatile – Having Tourettes means I’m impulsive and that I sometimes behave erratically. This can create a volatile environment that puts pressure on my friends, family and colleagues. I know this happens and that it’s important to be honest about the impact it has, but it doesn’t make it any easier to hear the environment I create being described as volatile. Of course, there are positive ways to frame this unpredictability and when I’m feeling upbeat, I call it spontaneous creativity. But the positive side isn’t what I think of when I hear the word volatile. What comes to my mind is the painful reality of people I care about being on edge around me, and not feeling able to discuss certain things for fear of my reaction.

Calm down – It’s natural that some people might respond to my behaviour by saying ‘calm down’, and if this is said at a time when I’m genuinely angry there’s no issue. But when it, or its close cousin ‘reign it in’, are used in relation to my tics, I find it wounding because it assumes a degree of control over them that I don’t have. It matters to me that people understand that my tics don’t reflect my true feelings or views and that it’s impossible for me to calm them down. I appreciate that ‘calm down’ is a phrase that comes out easily, even automatically, in certain circumstances, but hearing it always makes my heart sink.

Wearing – My tics, my obsessive thinking, and my unpredictable behaviour are wearing. I know this better than anyone, but that doesn’t mean it’s not difficult to hear other people saying they feel worn out by being around me. No one wants to hear that their company has a negative impact on other people’s wellbeing, even though the logical part of my brain understands the truth of this.

I’ve thought a lot about my relationship with language, but it’s usually about my involuntary language rather than words used consciously. This is the first time I’ve ever really thought about the layers of meaning and sensitivity to specific words that I’ve accumulated over time. But it’s not something I’ve ever talked to other people about and I’d be curious to know if anyone else has special words that they’re sensitive to – if you do, please share your perspective by leaving a comment.