Normally when I write this blog, I’m writing for everyone – all ages, all backgrounds, with all sorts of bodies and minds. But this post is different because I’ve written it specifically for children and young people who are at the start of their journey with tics.

Welcome to the community of people all over the world who tic!

A tic is a movement or noise that you can’t avoid making. They might also be called habits or twitches. Some people can hold them in for a few minutes, but doing this can be uncomfortable and takes a lot of concentration. Some people give their tics names – when I was younger I had a tic in my hands that I called ‘Crab Hands’ because it was like the claws of a crab opening and shutting.

Some people have one or two different tics and others have a lot. If you have both movement and sound tics for more than a year you might get diagnosed with Tourettes Syndrome, like me. 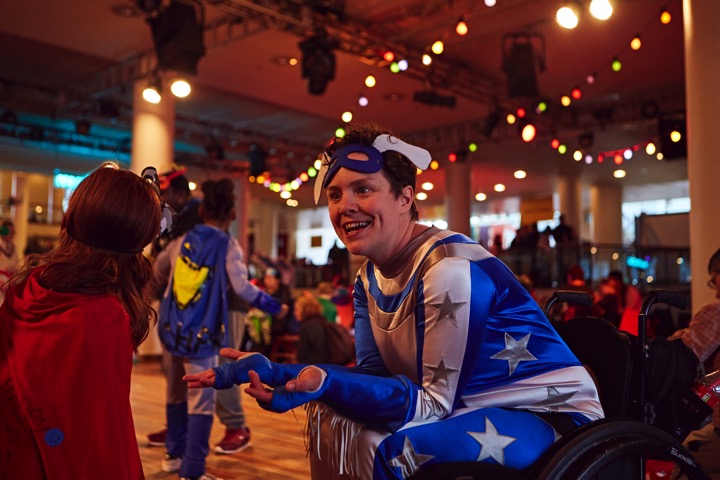 If you have just movement tics or just sound tics you might get diagnosed with a tic disorder. A diagnosis is where a doctor talks to you and your family about your tics and helps you understand them.

Everyone who tics will experience them slightly differently, we need a variety of bodies, brains and ways of thinking to have strong communities.

Having tics doesn’t mean that there’s anything wrong with you. But having some tics might mean you need to do things in a different way to other people. For example, if tics mean you find it hard to write, you might use a computer. Or if loud noises make you tic more, there might be times when you choose to wear headphones.

There are some tricky things about living with tics, but there are plenty of good things too. Lots of adults say that having tics has helped them be more caring and understanding of others. People with Tourettes do all sorts of jobs including being: teachers, doctors, actors, artists, musicians, pilots and many other things too.

1) You are not alone – while it’s normal to have tics, it can sometimes feel like you’re the only one dealing with them. But you’re not – there are around 300,000 people with Tourettes in the UK and many, many more all over the world. Making friends with other people who tic really helped me and made me realise that I wasn’t alone.

2) Some people will get things wrong – some people won’t have met a person who tics before, and some adults think they know about Tourettes when in fact they don’t. What people you meet won’t know is how your tics effect you.

I found that learning about tics and finding ways to explain them to others made me happier. If someone misunderstands your tics, tell an adult you trust as soon as you can.

3) Practice feeling proud – Tics are a natural part of people’s lives, including famous people like goalkeeper Tim Howard and singer Billie Eilish. Tics aren’t something to feel embarrassed about, but they might sometimes make you stand out. Practice talking about your tics and the other things that make you, you.

4) Doing Things Differently is not a bad thing – Everyone’s body and mind works in a slightly different way. If we were all the same, the world would be a boring place and lots of great inventions or discoveries would never be been made. There might be some things that your tics make harder, but if we think creatively, there’s usually a way to make it work.

5) There’s more than one Touretteshero – I used to think my tics were my problem, but through learning more about them and talking to my friends, I realised that they are actually my power! It took a while for me to feel this way, but now I proudly call myself a Touretteshero and there are lots of us. We are all powerful in different ways.

I’ve written this because I care about you and your family.

How you feel about your tics might change day to day, sometimes they might make you laugh and other times you might cry, and that’s totally understandable.

If you have questions or worries about your tics or anything else, talk to an adult you trust or you can get in touch with me at any time.

Good luck fellow Touretteshero, and welcome to the family!