I’d had a really disrupted night. My pain level was exceptionally high and didn’t respond to any of the things that usually help, so I’d been awake since the early hours desperately trying to get comfortable enough to go back to sleep. This proved futile and by the time the rest of the Touretteshero team arrived to start work I was feeling pretty ropey.

But there was a chink of light on the horizon in the form of a neuro-hydrotherapy appointment at St. Thomas’s Hospital this afternoon. My wiggly body means that I can only do the prescribed physio safely in water. I’ve been working with the same physiotherapist for several months and today was our last session before she moves to a new department.

With the cab booked to take us to the hospital I got on with my work as best I could. Then I noticed a tweet that made me anxious. It was one of many commenting on the Extinction Rebellion protests happening across London and beyond. Many of the tweets were reporting blockages and travel disruption around St. Thomas’s.

It was too late to make alternative travel plans, and when the time came and went for my cab to arrive, I started to feel increasingly worried. I called the hospital and after a long wait I got through to a very busy operator. She confirmed that many roads around the hospital were shut.

She connected me to the hydrotherapy department and I talked through the situation with them. We agreed that if a taxi could get me there in a reasonable time I’d still try to come. Sadly, no cab arrived and I had to call back to confirm that I was stuck at home.

This was not a life or death situation, but it caused me a lot of worry at a time when I was already feeling tired and unwell. I also thought about a message I got a couple of days before my appointment saying that not attending appointments costs the NHS around £160 every time. I imagine that there were many sick or disabled people who, like me, were simply unable to get to their appointments today so there are institutional as well as individual implications to not being able to attend an appointment.

I share many of the concerns of the Extinction Rebellion protestors and it’s exciting to see so many people mobilised for change. We need urgent action on the climate emergency and direct action is often the only way to get the attention of those in power and hold them to account. But I also think it’s important to make sure the disruption lands in the right place. We should disrupt the politicians and businesses profiting from pollution and climate chaos. But the social movements I want to be part of are those that better protect people whose lives are already under pressure due to ill health or disability.

It’s important that we address the urgent issue of climate change in a way that’s inclusive of all bodies and minds. While excellent work is being done in some areas it often seems as though only the most normative perspectives are being considered.

I’m sharing this experience not to criticise the protestors or their wider goals, but to make visible perspectives that seem to be missing from the planning of many environmental actions, whether that’s the car free day or the straw ban. 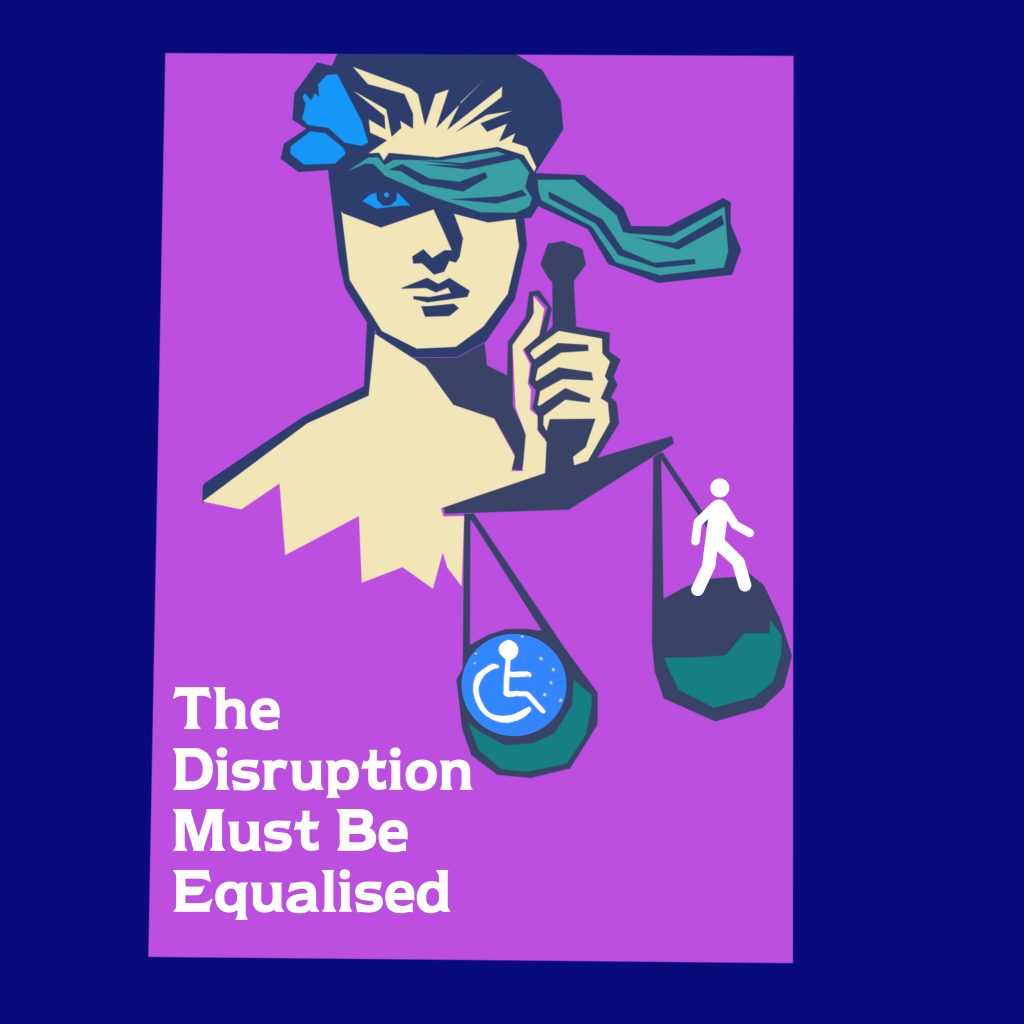 I understand the situation is urgent and that the impact of these protests is nothing compared to the catastrophic potential of unchecked climate change, but I want those organising any actions to understand that the current level of disruption is not equal. If you can walk, or jump on the underground, and if you have sufficient energy levels, demonstrations like the one today are only minor inconveniences. But if you rely on support workers getting to you on time, or if you can’t access public transport, or if you’ve been waiting for a hospital appointment for months, the impact is much more significant and stressful.

When disabled people speak out about the negative impact of environmental policies on their lives they are often characterised as selfish – this is a simplistic, ableist, response that fails to appreciate the current inequality of our world.

I’m not interested in movements that simply replicate this system inequality in slightly greener ways – I’m interested in changing the system so it’s more sustainable and equitable for us all.