My niece Bean loves animals but as a Londoner she doesn’t get loads of opportunities to see them, apart from on TV and the kitty that hangs out in her garden. She’s also much more into looking at them than touching them – but she is very into looking at them.

Today we took this to dizzying new heights – we went to the Zoo.

Technically I hadn’t been invited, but I had a support gap and asked Fat Sister if I could tag along too, so she could have the pleasure of looking after both her sister and daughter in a popular tourist attraction. With good grace Fat Sister and King Russell said yes, and I immediately got super-over-excited.

I knew exactly what I wanted to see first – penguins!

While Bean might not have understood what a zoo was at the start of the day she definitely did by the end, and like me she was obsessed with the penguins – insisting that we went back multiple times to watch them swim and waddle. 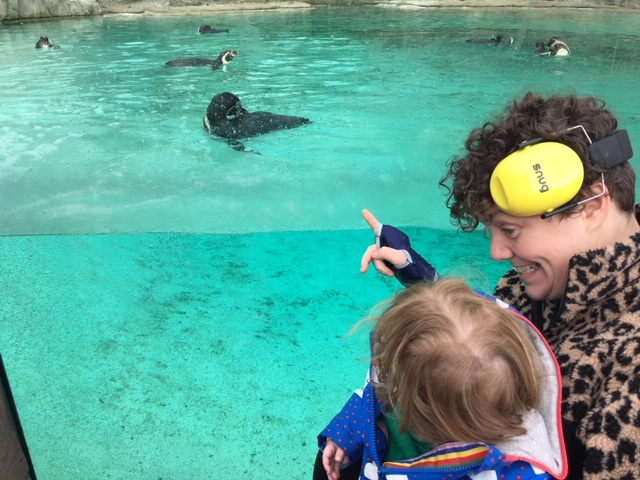 Bean was desperate to cuddle a penguin and King Russell had to make some deft moves to keep her from jumping in to join them. She left the Zoo with two cuddly penguins who she has named ‘Sticker’ and ‘Avi’.

Bean’s very clear that one is mine and one is hers although both penguins are living with and being taken care of by her. And she’s taking very good care of them: tonight they had a fish supper with added pasta and watermelon, went for a bike ride, took regular naps and had their bums patted to sleep.

I reckon ‘Sticker’ and ‘Avi’ have landed on their flippers.