I’m excited to hand over today’s blog to my friend and voice researcher Sophie Meekings. Sophie’s supported Touretteshero in a number of ways, most recently by volunteering at our big inclusive event Brewing In Battersea. She’s here to let you know about an exciting project she’s about to start working on, and inviting you to get involved. Here’s Sophie with more information and some very cute cats:

Or it can depend on who you’re talking to—I definitely chat to my cats in a completely different way to the way I talk to people at work. 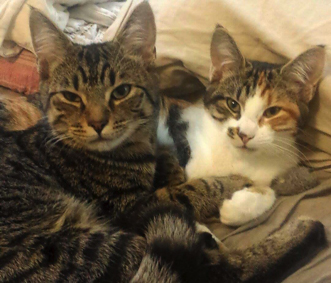 “HEY there buddies! Who’s the cutest? Is it you? YEAH it’s you!!!!”
But of course, if you’ve got Tourette’s, sometimes your voice does things you don’t have any control over. As a speech researcher, I’m interested in voices: how we use them and shape them, and whether that’s different in people who can’t always control what their voice does. But I’m also interested in the relationship that other people have with our voices.

Like Touretteshero, I’m a fan of the social model of disability—that’s the idea that disabled people’s problems are mainly caused by a society that isn’t built to accommodate our differences. Part of that is about how society shapes people’s attitudes, and how they act towards you.
I’m profoundly deaf and I’ve often seen how that changes the way people talk to me — like the man in a charity shop who was having a perfectly normal conversation with me until I told him I was deaf, at which point he suddenly started talking at half speed with really exaggerated face movements. (P.S. if you end up in a conversation with a deaf person, don’t do this! It actually makes it harder to lipread… and is also suuuuper patronising, in case you hadn’t guessed).

So I’m very excited to have been awarded a fellowship from the British Academy, funding three years of research into the relationship we have with our voices, and how your voice affects how other people perceive and react to you. The core of the research is a very simple task. I’m going to ask people who have unusual voice control—people who stammer and people with Tourette’s—to sit down with a typical speaker and play a spot-the-difference game. It looks a bit like this:

We’ll record these conversations and then analyse them, looking at how both talkers’ voices change during the interaction. We’ll also do follow-ups looking at whether having a conversation with someone with Tourettes, or someone who stammers, makes you more ready to accept similar voices.

One of the big aims of the project is to figure out whether things like Channel 4’s 2013 ‘Alternative Voices’ campaign (in which a bunch of people with unusual voices, Touretteshero included, took over the Channel 4 continuity announcements) can have a wider impact on society by promoting inclusion.

The experiments themselves will start later this year, if this sounds like your kind of thing, you can sign up here and I’ll contact you with more information when we’ve set everything up.

We’re looking for people who are over the age of 18, have normal hearing and are native British English speakers. Experiments will be held in London and Newcastle, and you can pick the one that’s most convenient for you. We pay £10 per hour and will also cover all reasonable travel expenses, so you don’t have to live in London or Newcastle to take part.

You can also contact me to find out more: my email is sophie.meekings@ncl.ac.uk and I’m on twitter as @sophiemeekings. (I’m also @sophiemeekings on Instagram, but there’s no science there—just more pictures of my cats). Thanks for reading!