I’m exhausted. Deeply, unrelentingly tired. But I’m also buzzing with joy, my brain awash with powerful, colourful memories of celebration and solidarity from the last few days of Brewing In Battersea.

Over two days and one night we mixed things up in Battersea Arts Centre’s Grand Hall. Disabled and non-disabled artists made amazing immersive spaces for children and adults. We danced, sang, floated, slid, drew, watched, thought, made and paraded.

I don’t have the words to describe the event and its significance, so instead I’m sharing some of the photos, drawings and reflections by other people to give a flavour of what got Brewed. 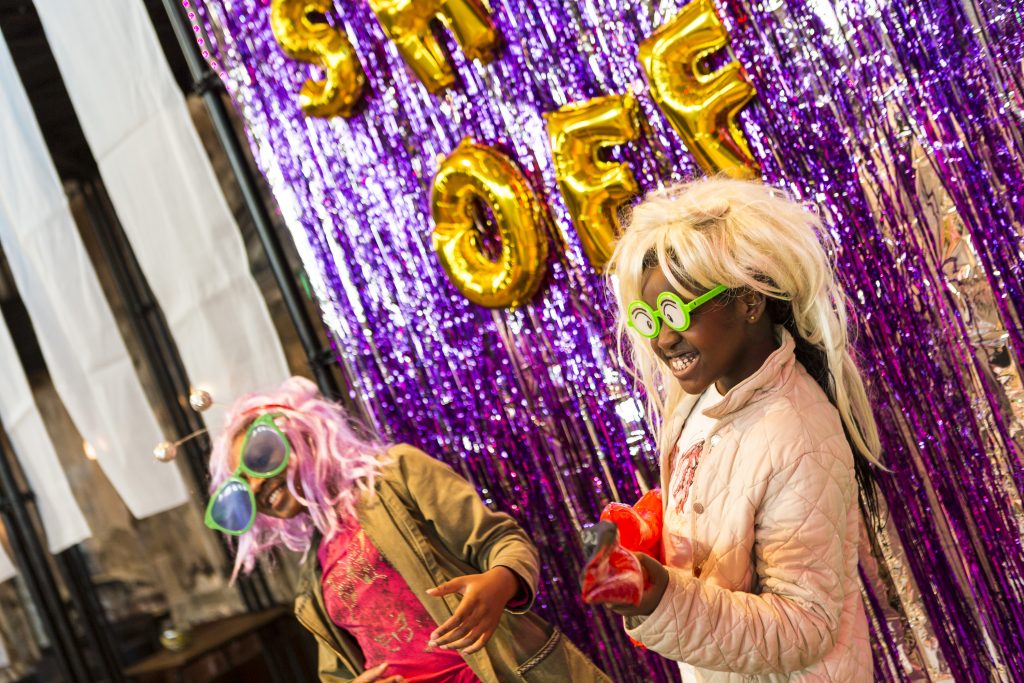 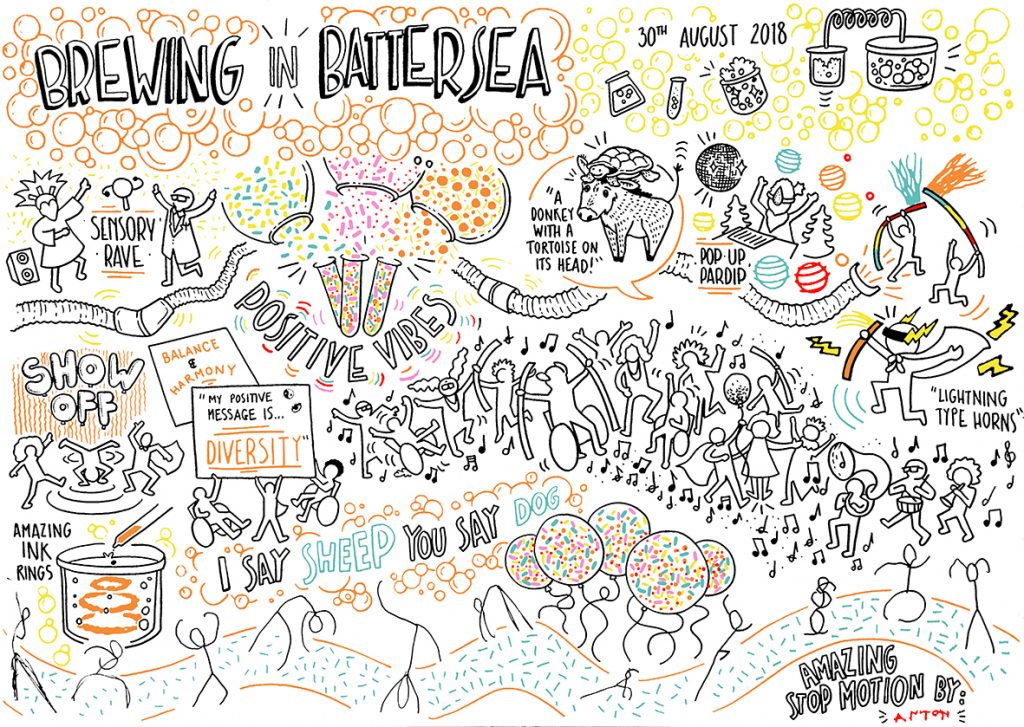 “My day has been AMAZING! I love the freeness, I love the understanding. This is the first time I’ve come to anything like this. It’s good to know that there are other people with the same disability as me. Before this event I’d never met anyone else with tics so this is my first time… it’s put my mind at ease.” (Sariya, aged ten)

“My son has been really confident from the moment he came in. He keeps saying ‘Mummy just go away, I can do it by myself, I can do it’ and I feel confident to let him because it’s so accessible and I can see it’s been made to work for him.”
(Marianna, parent/carer)

“We’ve been making potions: this is fairy blood. I’ve also made badges and been doing all sorts of things. There’s a lady who can draw anything. I asked her if she could draw a giraffe on a scooter and she did it.” (Ruby, aged six)

“I just had to go out and buy a parking ticket for the car and I just got a feeling that I can’t quite express but as soon as I got outside I felt a bit less free. You don’t realise when you’re in here but your mind and your imagination is allowed to roam free and then you go out again and some of those possibilities feel a bit more closed down.” (Andy, parent/carer) 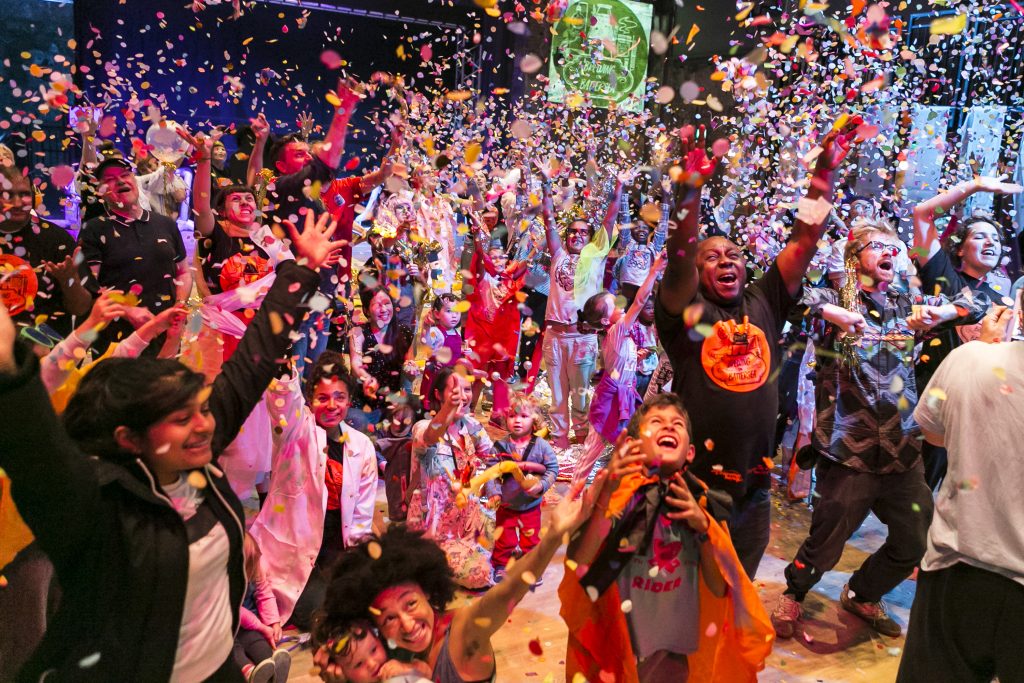 “What an amazing day and evening. It’s the first time my son has been able to be himself, tic and move freely without feeling he needs to suppress to appease others. It was a totally amazing environment and I can’t thank you enough for making our family feel so included and part of something – it was well worth the drive from Cornwall.” (Marie, parent/carer)

“It was interesting how much more relaxing a relaxed performance was for me. I came alone – which isn’t always fun – but felt completely welcomed by the people I sat with. It was great being able to come and go without worrying. Earlier that afternoon I had been to an event that was so silent and reverential that I was scared to move or cough or leave to go to the loo – the contrast really made me realise relaxed performances are more relaxing for EVERYONE, not just people with difficulties or disabilities. The acts were brilliant. So unique and inspiring and funny.” (Georgia, audience member)

As I sat in the Grand Hall’s beautiful domed entrance yesterday I watched three children come in. Their enthusiasm, creativity and imagination were instantly present as they dived into the colourful potion-making installation.

I felt totally drawn to and blown way by their amazing energy but I was also acutely aware that in many environments this energy and individuality would be problematized.

As I watched their imaginations take off I felt so proud to be part of the team making spaces where these children and others like them are free to be themselves, exactly as they are.

I feel certain that some of the children and young people who’ve come through the Grand Hall’s doors in the last two days will be the artists of the future, and I cant wait to programme them.

Over 600 people participated in Brewing In Battersea. They included roughly 289 children and young people, 12 artists, 20 volunteers, a lot of lab coats, two rave aliens, a mystic mermaid and a superhero.

To everyone who made art, got involved and shared in this experience, thank you!

Keep a look out for the next time we’re mixing things up with a ‘Brewing’ event.