Back in September we teamed up with artist and researcher Will Renel from the Helen Hamlyn Centre for Design to run a weekend of creative collaboration called Remixing the Globe. The workshop was for young adults with Tourettes and explored the different ways that sound can make people feel either included or excluded in public places like theatres. Two of the young creatives who took part, Serena and Felix, have written a guest post sharing their reflections on what we got up to.

“As might be expected in a room of people who’ve never met before, we started the first day by introducing ourselves. It was the first time in several years that I’d been around so many other people with Tourettes so it was quite nerve-wracking at first, but Touretteshero and Will were great at making everyone feel at ease (including Ralph the support dog)! Before getting stuck in to the day’s activities it was deemed important that we drew up a Collaborators’ Agreement. With the help of Amber, a live illustrator, we were able to present a suitably Shakespeare-esque document, detailing guidelines for the workshop. 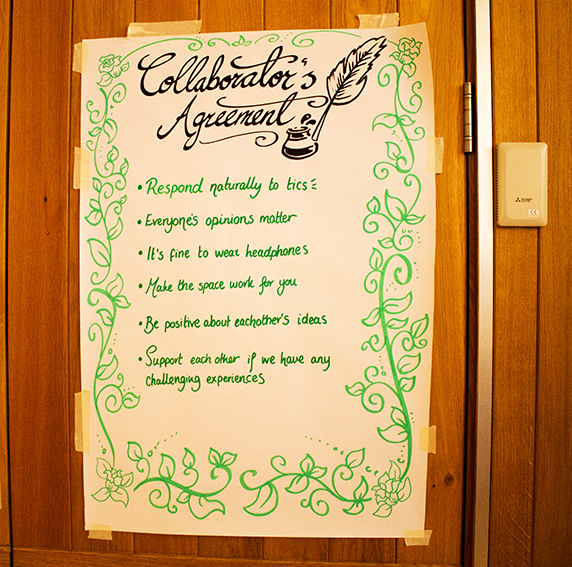 Amber wasn’t there just to write out the rules however – she had also been tasked with illustrating the whole event on a ‘live scribe’. As we explored themes of social isolation and accessibility in public spaces, Amber was there to listen and make our words come to life on paper! It was also established and agreed upon that – with express permission – Amber was to illustrate some of the more amusing things people ticced over the course of the weekend. This obviously resulted in hilarity, with my personal favourite illustrations being ‘Hitler moustaches are mandatory!’ and ‘It’s a bit like Love Island… but with bears’. 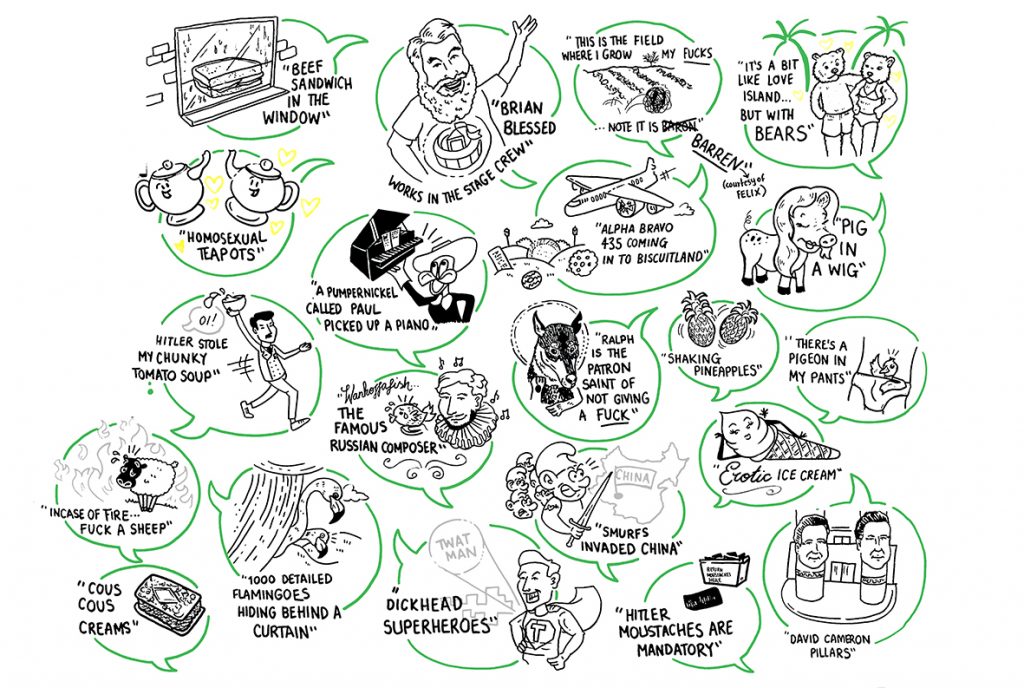 After setting out plans for the day, it was time to take a tour around the theatre, and visit the Globe Exhibition, a large, on-site museum dedicated to exploring the Globe in its three incarnations over the years. My favourite part of the exhibition was the old-fashioned printing press – I’m still disappointed that we didn’t make it on time for the demonstrations, but the rest of the exhibits more than made up for that.

Then, after a lunch break at the local pizza place, it was time to get started on our task for the weekend – mapping the Globe through sound. It’s important to recognise that accessibility is more than just physical ramps. Sound can play a huge part in making an area accessible to people with certain conditions, Tourettes being one of them. The purpose of the event was to discuss the ways different environments can exclude certain individuals. As people with Tourettes we obviously have vocal tics that can make us feel under scrutiny by those around us. One example of such an environment was a library but, more relevant to the workshop, theatres. We moved around the venue with assorted pieces of recording equipment, compiling sonic objects, environments and experiences, till the end of the day.

That evening, we were invited to see Much Ado About Nothing in the main Globe Theatre. I will handover to Felix to tell you about the show which started with a pre-show announcement written by director Matthew Dunster:

In the audience tonight we have a group of people with Tourettes Syndrome.

We only mention this because the group have, generously and sensitively, asked us to make the rest of the audience aware.

A symptom of Tourettes Syndrome can be involuntary vocal tics, meaning that members of the group may shout out random things at random times. But this is the Globe so we may not notice anything different! This is the Globe – where everyone is welcome and anything can happen.

We thank the group for sharing this information with us and hope you all enjoy the show.

So this is what inclusive theatre feels like. A ripple of applause went round the Globe, and went through my skin, prickling it. Our tics continued to be celebrated as part of the dialogue that theatre provides, with a highly professional and talented cast maintaining a fine balance between when to acknowledge a tic, and when the play was the thing.

Much Ado is a rude, lusty play, and the Globe’s production, set in Mexico, embraced the energy of its location, script and the audience. Tics and Shakespeare’s sharp wit ricocheted around the theatre, much like the stage guns which would delight and startle in equal measure. What I learned from the weekend about sonic inclusion was put into practice in this space – the needs of the audience were reflected by those who had control over the space, and this was communicated clearly, and engagingly. The guns, for instance, may not have suited the sonic needs of another audience – they may need to be signed, or displayed with a large flashing light for deaf audiences, or made quieter for an audience with a lower tolerance to sudden noises. But the Globe struck the perfect balance for this audience member, and for that, you have my thanks and on-going applause. 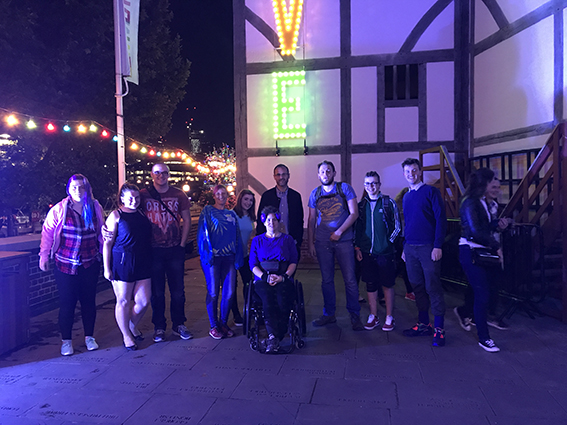 The next day, we were in bright and early to continue our task from the previous day. This time we were allowed to tour the inside of the auditorium, recording sounds and exploring the stage. Getting the opportunity to stand on the Globe’s stage was a fantastic experience, if only because of the bemused looks we were getting from visiting tourists. The cast from the previous night’s show came out and talked to us about experiencing theatre with Tourettes, creating a really productive discourse on the topic. 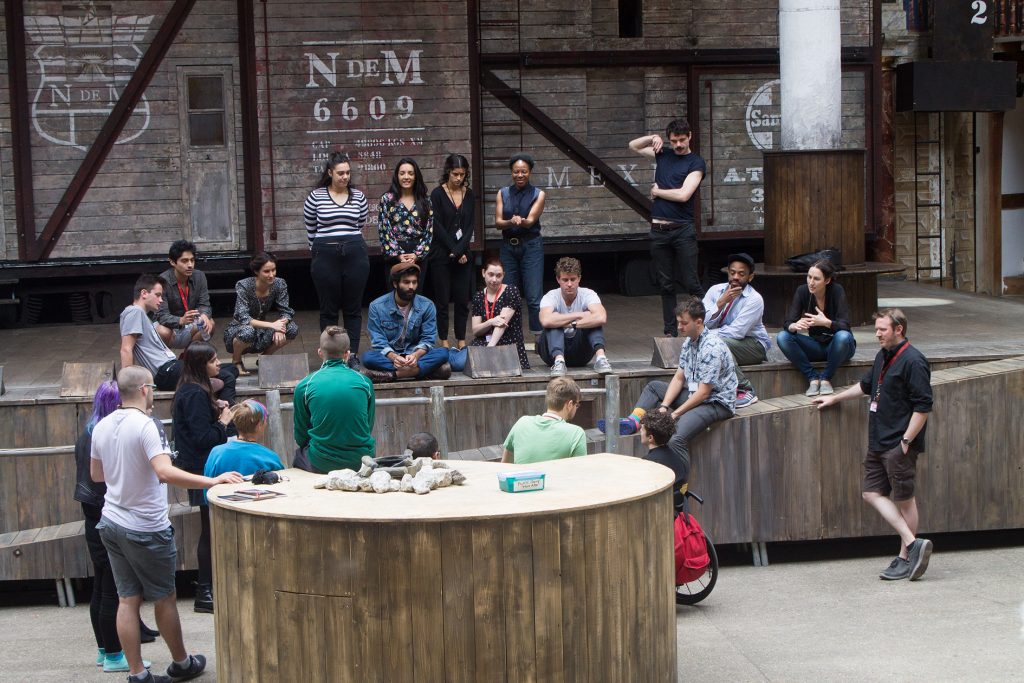 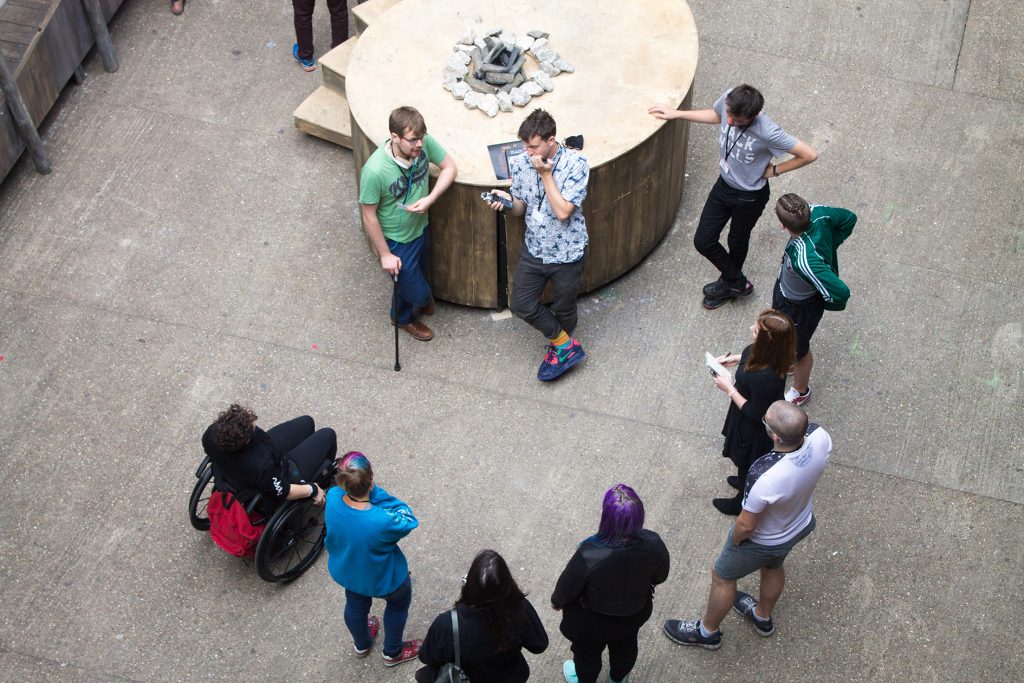 After we’d collected all of the sounds, we split into three groups to work on different tasks. Group 1 worked on an interactive ‘design your own soundscape’ installation, group 2 worked on a giant sound map using sound stickers, contact microphones and photographs, and group 3 developed some guidelines for pre-show announcements – thinking in particular about productions with people with Tourettes in the audience.

I was involved with the latter and set about brainstorming the most important points to include. My driving motivation with the announcement was that if the audience feel that the performers are excited to have people with Tourettes in the audience, they too will be excited – or if they’re not, they’ll be too embarrassed to make a fuss about it!

The resulting product was this: 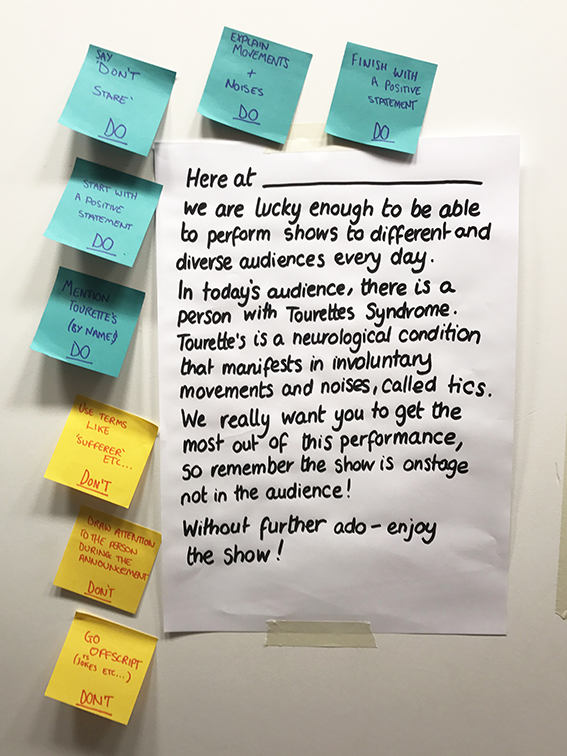 At the end of the weekend, we held a small informal sharing of our work. The completed project involved a full map of the Globe, made interactive with sound stickers, photos and recordings of the various sounds heard at different locations. It was a brilliant experience and I learned a lot, both about general accessibility, and the extent of my own condition.

Thank you to Serena and Felix for putting together a post that truly reflects the amazing conversations and creative work that took place over the Remixing The Globe weekend. Thanks also to everyone who took part or supported the project – I can’t wait to see where these ideas and collaborations go next.

I feel deeply excited by the wealth of talent within the Tourettes community, and as a team at Touretteshero we’re committed to helping the next generation of artists establish and share their practice.

Watch this space for more opportunities to get involved and collaborate with Touretteshero in 2018.