Tonight the castle hosted a special party in honour of Brian. Many of my regular friends and support workers turned out in his honour – Leftwing Idiot, Poppy, Bunny, Fran, Claire, King Russell and Fat Sister. Brian however failed to show up.

This wasn’t a huge surprise because “Brian” is a regular tic rather than an actual person. Nevertheless, this evening’s party was dominated by Brian-based activities. We played:

Brian, Brian and Brian
This is a version of a game I knew as Heads, Bodies and Legs, which is a bit like Consequences. We each had three Post-it notes and each of us drew what we thought Brian’s head looked like on the first, then his torso on the second and on the last, his legs and feet. Then we mixed them up and each of us selected a new head, body and legs from the piles. We taped the three bits together and revealed our Brians. Here they are: 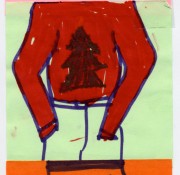 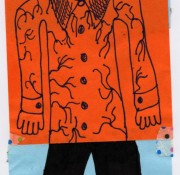 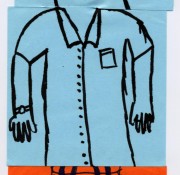 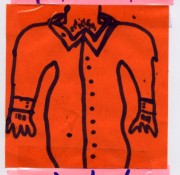 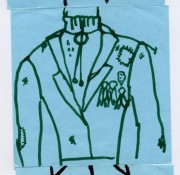 Weirdly both Russell and Poppy drew him with a peg leg!

Twenty Brians
This is a simple game but it took us all evening to complete: Name twenty people called Brian – they don’t all have to be famous, but they do have to be real Brians. However, we did, rather contentiously, allow Richard O’Brian. Add your own Brians in the comments section below, but try doing it without Google and you’ll see why it took us the whole evening to finish.

Pin the Brian on Bunny’s bum
Bunny looked nervous when I ticced the name of this game but relaxed as we established we’d use tape rather than pins. The player, blindfolded, chose one of the Brians from Brian Brian and Brian, and then had to find Bunny and stick it to her bum just by hearing her call out. This seemed fun for everyone except Bunny who spent much of the game distinctly on edge.

Secret Santa for Brian
This was the main activity. We’d all bought gifts for Brian that cost under a fiver. As he wasn’t there, and as I’m sure he’s a generous soul, we each picked a gift to unwrap and keep. Although we all selected our gifts randomly many of them were spookily appropriate for their recipient. Here’s what everyone ended up with:

Truth or Brian
Fran read out questions from Claire’s new card game. As a group we answered for Brian, and voted on how we thought he’d respond.

It was a really lovely evening, thanks to all my friends, and to Brian.